All the Cat Snuggles 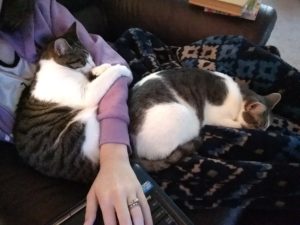 Good morning friends. I’m writing later than I intended this morning because I get all the cat snuggles today, apparently. My husband went to work and fed the cats, as usual and after Pearl had demanded my attention for a while, I went back to sleep. I try to get up around 9:30, but this morning, as I pondered getting out of bed, Calamity decided to lay on top of me. This is not totally uncommon, so I wouldn’t have felt too bad disturbing her, except that Pearly had decided to snuggle behind my legs and she very rarely snuggles with me in bed. I couldn’t bring myself to disturb two comfy kitties, so I slept in another half an hour.

Now I am covered in cats once more, and I’m okay with that, for now. I will eventually have to move, to pee or eat or something, but chances are they’ll be done with me by then, so it’ll be okay. I’ve been getting a lot more cat snuggles recently and I’m a little curious why that is. I have a couple of theories on the subject, but really, who knows what’s going on inside the cat brain.

We were gone a lot in August. That’s over now, thankfully, but we were gone for a whole week and then half a week and then a weekend. Basically not a week went by in August that we weren’t gone for a few days at least. My brother house-sat for us while we were in Port Clinton, so the girls weren’t left alone all week, but the other two trips they had the house to themselves for several days. My husband thinks they’re making up for lost snuggles now. Calamity has been sleeping with me every night. Pearl even makes an appearance sometimes, which is rare. She’s much less into night time snuggles. While I was visiting a friend, both cats stayed close to Logan while he was gaming and followed him around. I think it’s quite possible that they missed us and want to keep us close now.

My theory is it’s just cold. I’m sure they missed us, but I’m more inclined to think the increase in snuggles is due to the desire for fuzzy blankets and body heat. We got far less snuggles over the summer, though they did happen sometimes. I think it was just too hot for snuggles and so we didn’t get many. Now that the weather is cooler and the house is a little chilly, snuggles can recommence in full force. Just another reason why fall is the greatest, if it brings with it more cat snuggles.

Double cat snuggles are pretty rare here. Usually I get either Pearl or Calamity, but not usually both at the same time. It happens, of course, but usually if one is comfy and the other comes and makes herself comfy, the first cat decides it was time to move on anyway. They have a habit of disturbing each other in the quest for a comfy position. This is interesting, actually, as they have very different cuddle preferences, so you’d think they wouldn’t clash that much. Calamity likes to be up by my chest, snuggled close to my face. Pearl prefers my lap or stretched out down my legs. This morning I have an upper Calamity snuggle and a lower Pearly snuggle and it seems to be working out just fine.

I have things to do today, but we’ll see if they get done. I’m sure the cat snuggles won’t last forever. They never do. It’s just a matter of time before I sneeze or they hear a noise and must go investigate. They may possibly just get board, or I may have to pee before their done, or shift or something. And then, sadly, it’ll be back to responsible adulthood and the cleaning I’ve been putting off for weeks between vacations. No more excuses! Well, except for cat snuggles. Cat snuggles are the best excuse. Have a lovely day, my friends.

‹ A Dark and Stormy Morning Ramble Adventures in Decaf ›