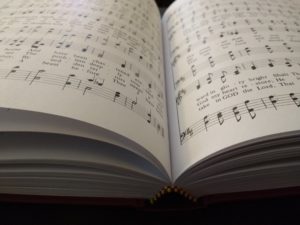 I’m not fond of thunderstorms. I understand that thunder is relatively harmless. If I’m hearing it far off it can’t hurt me, I know that. Still, I don’t like the sound, I’m not a fan of the flash of lightning, or the wind or the pounding rain combination. I’m just super not into it. I also struggle with occasional anxiety attacks. Sometimes they’re triggered by actual things, sometimes it’s just my body freaking out for no reason. Either way, I find myself shaking and unable to sleep. In both of these struggles, I have found great comfort in the Psalms.

I grew up in a church that sang the most modern of contemporary Christian music. There was a worship band for the main service and the youth group and they played all the most recent hits from all the big CCM artists. I loved worshiping that way. I loved singing all the songs by heart, raising my hands and closing my eyes, swaying to the music, clapping along with everyone else. When I started at Geneva I couldn’t imagine falling for this “exclusive Psalmody” thing. I couldn’t imagine not “getting into” worship the way I did at my old church. Sure, the church I grew up in had long since stopped being about worship and started simply trying to draw as many people in as possible. Shortly into my time at Geneva I switched churches in favor of slightly more conservative worship: i.e. not a rock concert.

Looking back at my CCM worship experience, it was very solitary. I didn’t feel like I was part of a greater whole at the church I grew up in, probably because I wasn’t. I didn’t have a connection to the people around me, I was just one fish in a tank packed full of carp. I was one of a swarm that no one would miss if I was plucked from the waters. No one even knew I was there. You couldn’t hear my voice over the roaring music and the singers on stage. I couldn’t hear my voice over the music. I was lost in the sound, alone with my heart open, feeling for anything to touch me. I genuinely believed I was connecting with God in those moments. I didn’t realize it could be so much more.

When I started dating my husband I started to consider the Reformed Presbyterian church. I knew from the start, in that hopeful new relationship kind of way, that this was the man I was going to marry, and if he was “the one” I would be attending an RP church at some point. See, we came from two polar opposites of worship, me from the CCM worship band, and he from the exclusive Psalmody a capella worship of the reformed tradition. I had yet to put down roots in any church at that time, and his dad was his pastor, so I knew, if we got married, we would go with his stronger connection. This meant giving up my way of worship to give the Psalms a try.

I remember sitting with my now father-in-law the first time I went down to spend a weekend with them. It was over fall break, we’d been dating about three months and this was going to be my second ever RP service. We were talking about my worship experiences and I was telling him about my old church and how they’d basically turned worship into a rock concert that you could hear well outside the sanctuary. My siblings and I had stopped going in because it was too loud for us to handle. I remember telling him that I had recently switched to an Alliance church because “I liked to actually hear people singing together.”

“You’ll love it here then,” he said to me. “It’s only people singing together.”

That struck me, hard. I had no response. I was still so attached to the idea of singing with music, of worshiping the way I had always done, that it hadn’t occurred to me that what I was really looking for was something completely different. I will admit, it took some time, even after that. As Logan and I progressed in our relationship I was exposed more and more to the Psalms and worshiping a capella, with voices alone. The summer after he graduated I started attending a local RP church with some friends of ours. I would have done it sooner, but we were finishing a study in Revelations at the Alliance church and I wanted to stay for the end. It was awkward at first, it always is, but gradually I began to recognize tunes and words. I began to sing with more ease along with the many saints around me. I became part of the Body, not just another fish in the barrel.

Fast forward three years and here we are. I recently expressed to my husband my regret that we didn’t have any Psalms sung at our wedding. I asked him if he had wanted Psalms and if so, why he didn’t suggest it. His response was “You weren’t as in love with the Psalms then as you are now.” And he’s right, I am in love with the Psalms. I don’t think I would have thought to describe it that way, but it sums up perfectly how I feel about them. I got my very own Psalter two Christmases ago. I fairly recently began marking the Psalms that I know well enough to sing off hand. I don’t read music well, but I know enough to recognize a tune if I’ve heard it. The number of purple lines under selections is ever growing and it makes me so happy every time I get to add one. Mostly right now it’s just finding all of the ones I’m familiar with. 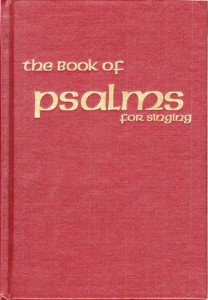 So you might be wondering, why? What’s so great about the Psalms anyway? I will tell you. The Psalms are the written word of God, given to us for the purpose of praising Him. They the are the prayers and praises of generations of His people going back to the beginning. They are songs of sorrow, of crying out to God in anguish for aid, but still praising Him for His goodness. They are songs of unbridled worship, of celebration, confessions of love. They are songs of anger, of wrath against those who do evil, calling for justice from the ultimate judge. There is a Psalm for everything, every emotion is expressed somewhere in the Psalms. They are not singer focused, it’s not about what we do or what we have, they are all about God and His glory, His power, and His mercy.

I look back at the songs that I used to sing so fervently in worship and I have to shake my head. I think about the songs the declared “I worship You” and understand now that it wasn’t about what God was doing, it was about me. I was bringing worship, instead of being given worship to bring. “You took the cross, and thought of me, above all.” “You make everything glorious, and I am Yours, what does that make me?” I, me, my, that was the focus of so many songs. Not all of them, but so many, and any is too many in worship. “From the mouths of infants young, You the power of praise compose,” declares Psalm 8:2. I am nothing, I have nothing, but I have been given the words that God longs to hear and have been given the ability to sing them to Him.

The other thing about singing scripture is that it is infallible. There are no theological inaccuracies in the Psalms, there is only truth. I have struggle for so long trying to remember the song that first struck me as being theologically off and I just can’t do it. But I remember the moment, two moments, actually, when it struck me. I was in the car, driving home from Geneva when I heard it on the radio. I was singing along, of course, and I sang a line that was very clearly not right. I know what they were trying to convey, but it came out very wrong. It was the first time that had clearly bothered me. I remember singing that same song in worship the last time I would attend my parents church on a Sunday. I remember standing there, feeling the wrongness of it all. Halfway through my senior year of college, after attending RP services for months, I finally identified the hollowness I had felt long before leaving that church.

My mom-in-law has said that one of the things she loves about singing Psalms in church was listening to her kids sing scripture around the house growing up. It’s one of the things I look forward to most about raising children in the RP church. I can’t wait to sing the Psalms to our children as we rock them to sleep. I find the idea of comforting a fussy child with the word of God so beautiful. The thought of our kids knowing the Psalms the way other kids know nursery rhymes makes me smile. I can’t wait to them with our future kids.

Are there songs outside of the Psalter which glorify God? Sure. I still enjoy many of the songs from my youth; many of the Christian artists that I listened to produce great music. But that does not make them fit for worship. You can enjoy the hymns, but that doesn’t make them God-breathed. My in-laws often listen to CCM on the radio and have gone to many Christian concerts, but that doesn’t mean they’re right for worship. My husband often says “If God gave us exactly what He wants to hear, why would we give Him anything else?”

We have an album of Psalms for Praise by New Song, a music and drama ministry group sponsored by Geneva. I’ve discovered that it is a great comfort to me, when I’m feeling especially anxious or when there’s a storm outside during the night, to put on that album and listen to the Psalms. I can sing along to most of them, at least a little bit, and it reminds me that I am part of a whole. There are believers singing these songs all over the country, and all over the world. These are the songs that were sung by the apostles, by the early church, by God’s people for generations, for thousands of years. It reminds me that I am held by a just and powerful God; that He has made everything and nothing is outside of His control.

“For whom have I in heav’n but thee? None else on earth I long to know. My Flesh may faint and weary be; my heart may fail and heavy grow; With strength doth God my heart restore; He is my portion ever more.”
Psalm 73C: 25-26 The Book of Psalms for Singng

2 thoughts on “Psalms for Praise”