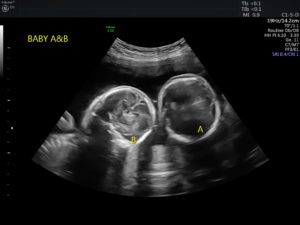 Good morning, friends! It’s a Monday morning, but since Thanksgiving is this Thursday and I skipped last Thursday already, I figured I’d shift my schedule up by a day so that we could get in two posts this week before the big holiday. We’ve sort of talked about this topic a lot, but I don’t know that I’ve really addressed directly the fact that we are having twins. It’s been a long month of processing that information and adjusting our expectations to fit what is to come, but I think we have finally arrived at a pretty good place after the startling reveal half way through our pregnancy. While I’m sure it’s probably come across that I’m more stressed out than pleased with the news of twins, let me assure you now, I am so thankful for our twin boys.

I won’t deny that I’m scared to death, but I think that kind of comes with becoming a parent in general. I don’t know if I would actually be any less scared if we were having a singleton instead of twins. The idea of Logan and I being responsible for any tiny lives is frightening in and of itself. Okay, scratch that, the thought of me being responsible for a tiny life is frightening. I know Logan will be the best dad ever, he’s so ready and willing to do whatever it takes to raise our children to be respectable adults. He’s so excited to go through the shorter catechism with them and teach them about God and salvation and watch them learn in church every week. He’s genuinely looking forward to grabbing shirts to keep little boys from falling over chairs and chasing tiny humans and taking the boys out for daddy play time while I grab a shower and a nap. He’s going to do great, and I’m so thankful for him as well. I’m not so sure about me, though.

So becoming a parent has been my biggest dream and my biggest fear all at the same time. I’ve always wanted to be a mom and now it’s happening and I’m so afraid of messing the whole thing up. Thankfully we have so much love and support around us that I know everything will be okay, but still. We have to keep not one, but two tiny people alive for the next eighteen years, while remembering that it’s not actually up to us how they turn out. We can only do our best as we are enabled by God and pray that He brings them to him and leads them on the path of righteousness. It’s this balancing act of doing everything we can and at the same time knowing we’re not in control. But that applies no matter how many babies we have.

I’ll admit that when we first found out about the twins I was far more on the side of shocked and panicking than joyous at the news. Twins present a whole new set of challenges that we weren’t expecting to face. Aside from being high risk now, we also look to a future of twice as many diapers to change, feedings to do, tantrums to quell and car seats to juggle. But you know what? We were in for that eventually anyway. I’ll be honest, during the early days of this pregnancy I was beginning to doubt if more kids were going to be a thing in our future. I was trying to imagine doing all the toddler care activities while feeling so entirely drained of energy and will and I honestly didn’t think I could handle it. We wanted to have two close together so that they wouldn’t be alone for too long and would have someone to grow up and play with. But feeling as exhausted as I was, I wasn’t sure I could handle having two under two like I had in my head. Well, I got my two under two, and I won’t have to worry about a second pregnancy in the middle. God has a funny sense of humor.

Now that the processing and adjusting is pretty much done, I am so thankful for our twin boys. I will admit that I am a little disappointed I’ll have to wait to try for a little girl, but there was no guarantee that I was going to get a little girl the second time around anyway. Or ever, for that matter. I could end up with a a house full of boys. Regardless, I am so happy that our boys will get to share this very special bond. They are coming into the world with a built-in best friend, with someone who will understand them better than anyone else. They’ll never be alone, never have to transition from only child to older sibling. They’ll always have a playmate. I am so thankful that our boys will be blessed in such a way. It’s a little intimidating, sure, but God has given them the greatest support they could ask for and I am so thankful that He is already providing for them in this way.

I’m thankful for the break that having twins will provide. Sure, my plans are not God’s plans, obviously, and if He decides we’re ready for another baby we’ll have another baby, regardless of where we are. Ideally, though, I’d like to be in a bigger house before then, though. When we moved here, my thought was that we would have two kids in the five or six years it would take to save up for the down payment on a house of our own. We can comfortably fit two kids in the second bedroom, I think, and that would give us time to potty train the first wave before starting on the second. This was, of course, assuming we’d have one baby, wait a year or so and then try for a second. Again, God has a funny sense of humor. I’m thankful that we will be able to comfortably fit our two boys in this house, and I am thankful that we don’t have to wonder about trying again while they’re still in diapers. I’m thankful that I have several built-in years of waiting to try for more kids that come with the house. Sure, if we happen to get pregnant again, we can make this house work for us, but ideally we’ll have time to enjoy raising our twins before we try for another baby.

The next couple of months are going to be a little scary. Okay, a lot scary. There’s a lot that can go wrong with a twin pregnancy, especially with one placenta. We have the best doctors possible and our boys have been nothing but healthy and happy thus far, but you never know. Chances are they’ll spend some time in the NICU, which is a little stressful to think about. I know that from here their chances are only getting better every day of being born safe and healthy, but still, it’s all very intimidating. Thankful we know we are not in control, God is. And His plan is perfect, no matter what. I’m thankful that I can trust our boys to Him, that He is watching out for them and holding them in His hands. That He knows their every move, their entire future, and that He is in absolute control. Today, I am thankful for our twins. What are you thankful for?

One thought on “Days of Thankfulness: Twins”