So as you may remember we are getting cats. We are very excited about these cats and as of yesterday we officially moved said cats to my in-laws so that they can go to the vet today and get all checked out and everything. Thus far the transition has been rather interesting, starting with their first bath done by me.

My sister says they’ve had a bath before. I wasn’t present for this, apparently, but I’ll take her word for it. Calamity and Pearl are funny cats as Calamity is a much more adventurous, high-energy, super affectionate kind of cat and Pearl tends to be more calm, shy cat who prefers to stay were it’s safe and sleep. When faced with a bath, however, they switch completely. 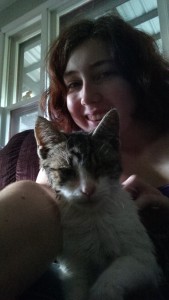 Calamity went first. I didn’t think to ask my mom for help at first, but then again, I didn’t expect my little cousin Zach to be in there with me either. But he was, and may have made the situation worse, I’m not entirely sure. Calamity is pretty chill about him and is very tolerant of a lot of things, including being carried around by a three-year-old. Her bath was thus sad as she cried a lot, and tried to escape a little, but mostly dealt with it like a big girl. Pearl, on the other hand, was having none of it. She cried as soon as she was in the tub, searching for a way out and as soon as the water actually hit her she was doing her best to bolt out of the bath as quickly as possible. She was so scared she even pooped in the tub. Her bath was much swifter than her sisters. 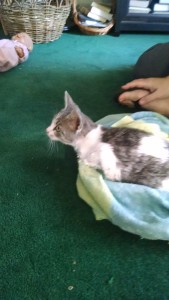 Once relatively clean and on their way to drying, Calamity and Pearl switched back. Calamity was ready to explore the living room, clean herself in the sun, and get right back into my lap for pets and scratches. Pearl on the other hands was very content to be held by my mom and when put down, stayed huddled in the towel until she was moved at which point she decided the safest place was under the couch. She dried much more slowly than Calamity, but at least she was safe from Zach.

Next up came the car ride and they took that surprisingly well. It was just me in the car with two kittens in a pet taxi in the back seat. I went down to get Logan from work first, partially because the timing worked better, and partially because we wanted to show his co-workers the cats. There was minimal crying and Pearl, true to form, fell asleep through most of it. Calamity followed suit after a while, and neither one threw up or pooped or anything that I was afraid of happening on a long car-ride. 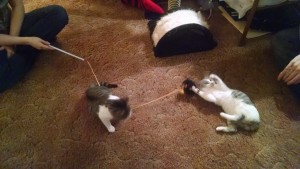 Once at the in-laws the final phase of their journey was complete. They were let out after dinner and Calamity, naturally, was very eager to get out and see where they were and who all the people were. Pearl curled up inside the carrier and slept and purred. Eventually we took her out too and she kind of hung around, warming up to her new surroundings and slowly getting into the cat toy teasing her sister. They were both pretty well behaved, except for the whole eating all the wet food meant for the other cats. We decided they should spend the night in the down-stairs bathroom so that they didn’t scare the two cats already living there, and so they don’t give them any illness they might have that we don’t know about yet. The pair were very sad about the small space, but they had food and water and a littler box and more space to move around than in the carrier, so really, it was the better option.

Today we’ll take them to the vet, which will be interesting. I’ve never taken a cat to the vet before, let alone my own cats. This is one of our many first steps as cat parents and I’m super excited to get it over with.