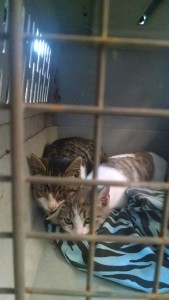 Pouting in the carrier.

The great cat adventures continue! With a trip to the vet on Friday. Logan and I went over to my in-laws and scooped up our cats, who were conveniently hanging out in their carrier, and took them to the vet for their very first check-up. Calamity is much less into the carrier than Pearl is. If there’s another option of places to be she’ll take the other. Pearl on the other hand, is pretty into the carrier and is perfectly willing to go in and just lay there.

So we get to the vet and they take us back to a small examination room and take out the girls to have a look at them. The vet tech, Sam, was super nice and fond over our cats as she explained what all they would be doing and asked us questions about their health and history. They took blood, which meant that both cats came home with a big yellow bandage on their back foot, but apparently they were both very good while it was happening. Sam was amazed at how chill Calamity was while giving blood. I imagine Pearl was a little more trouble, but still well behaved enough to not be difficult. 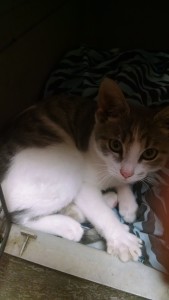 The carrier is clearly the safest place

Sam and the vet came in and out with our cats throughout the visit and explained what was going on with them and what they were doing and what it all meant, which was very nice. They ran all the usual tests which came back negative for both cats, and tested for ear-mites, which they both have. Apparently kittens have worms just by virtue of being kittens, so they were given medicine for worms, ear drops for the mites and Calamity got a gel for her eyes, which are already improving. Pearl got her shots, because she’s the healthy one, and Calamity goes back this Friday for hers and to make sure her eyes are clearing up alright.

True to form, when Calamity wasn’t being examined she was wandering around or demanding snuggles from my husband. Pearl, on the other hand, returned right to the carrier, every chance she got. She would come out for pets if I knelt down beside her, but for the most part she was content to curl up in there and wait out the whole vet experience. We took them home with a bag full of free stuff from the vet and returned them to their bathroom holding place. We’re hoping to integrate them slowly with the older cats this week, but for now they’ll sleep in the bathroom, where it’s safe. 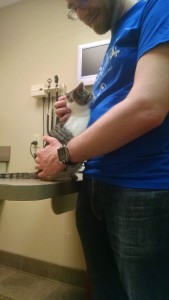 She needed some comfort from Logan.

Sunday we got to hang out with our girls again and they very sweetly came over to sleep on my lap when we sat down on the couch, even though they had already taken over my father-in-law. They didn’t stay long, though, before Calamity decided it was time to play and Pearl decided it was time to cause trouble. They discovered the stairs at some point in the past two days and that the big cats’ food was up there and they really like food, especially someone else’s food. So the day was spent snuggling one cat and chasing after the other, for the most part. There was a respite when Pearl decided to snuggle for a little while and Calamity took over my sister-in-law Molly and was quite content to remain draped across her for several hours.

We did Calamity’s eye medicine as well, since they are our cats and we were there to do it. We would have done the other medicine too, but we had already stayed way later than we should have and weren’t going to get to bed until nearly midnight. The eye medicine made me feel bad, but it wasn’t too hard. I’d done it with another cat back home, so I knew what I was doing. The gel goes along the eye and then melts in so you don’t have to hold the cats eye open to do it, it’ll get in there on it’s own. The only really hard part is the look on her face as I did it. She was so pouty in her little Calamity way and just hung limp in my husband’s arms for ten minutes afterward before deciding she was ready to be a real cat again. Poor baby, but her eyes really do look so much better already. They’re not swollen anymore, and she can actually hold them open now.

It was so nice to snuggle my cats, to sit and read on a Sunday afternoon with Pearl curled up in my lap. I can’t wait until we have our own place and can take them home with us forever. Until then, I’ll have to be happy with visiting them every Sunday.