Why Everyone Needs to Go to College Hill Ice Cream Shop 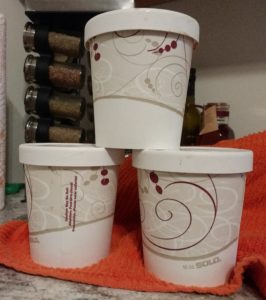 I got ice cream yesterday. It’s like 50 degrees outside but I got ice cream and I’m not sorry about it. I have three partially eaten pints of three different flavors of ice cream in my freezer right now and I feel no remorse. I sat in my bowl chair last night in a giant sweater and fuzzy blanket and enjoyed some of the best chocolate ice cream I have ever eaten and probably the strangest flavor I’ve actually enjoyed and I have to say, it was worth it. This is why every one needs to go to College Hill Ice Cream Shoppe.

Background: College Hill Ice Cream Shoppe has been on College Hill in Beaver Falls, PA, for a little over a year now. It’s one of those places that they talked about opening for a long time, but things kept getting in the way. Logan had heard about it while he was in college at Geneva and the a year or so after I graduated they finally managed to open their doors. We were so excited, and a little worried. They took up residence in a cursed plaza. You know, the kind that can’t seem to keep businesses for more than a year or two? The kind that always has something new because nothing lasts? That kind of plaza. So it made us nervous that they were in there, but excited to have them nonetheless. They’re super new still, so they have a little baby website, but a strong Facebook presence, so look them up.

Story time: My husband and I are super into local businesses, especially those in our college town. College Hill is full of small businesses and if we could support them all we would. But naturally, we have our favorites, and CHIC is one of them. So when they sent out a post on Facebook asking for support I was more than willing to jump on that excuse to get more ice cream than I could possibly need. So I decided after I left my parents place yesterday I would grab a quart of ice cream for us to eat while we watched a movie or something. It would be a good date night treat and we’d support one of our favorite establishments. Easy, right? Here’s the thing about CHIC, though. They aren’t your average ice cream place. They specialize in fancy flavors that you don’t see other places. They have a salted caramel ice cream that is out of this world, an ice cream that tastes literally just like the milk in a bowl of Froot Loops, they have Oreo cream ice cream made from Oreo cream. It’s madness! That’s not even mentioning their classic flavors. The Zanzibar chocolate is by far my favorite.

So I think to myself, “No problem, I’ll just pop in, get a quart of Zanzibar and be on my way.” Then I hesitate. They have pints and quarts and I’m not sure what the size difference is and if I need a whole quart or if a pint will do. So I ask the guy behind the counter what he thinks would be enough ice cream for two people. He reasons that if we’re into ice cream, best go with a quart, but if I get a quart, I can only get one flavor. He makes a very good point there. Logan and I both really like chocolate, yes, but Logan also likes other things, so maybe I should get two flavors. It’s only a little more, why not?

I look at the flavors they have, because it changes periodically, and he shows me the seasonal flavor they have, which is a pumpkin spice ice cream with gingersnaps crumbled in. Now, normally I’m a little weary of things that are randomly pumpkin spice flavored, especially when ginger is involved, because I’m not a huge ginger person. But just like that, he’s passing over a sample spoon and it’s actually the best thing ever; even the gingersnap pieces are good. Then he’s telling me about the salted caramel, and I know about the salted caramel ice cream, I’ve had it before, but I’m not going to turn down the sample spoon he hands over as he’s talking about it, or the Blue Moon that he hands over, which is the one that tastes like Froot Loops milk, or the coffee ice cream, or any ice cream really, but the samples stop there as I make my first decision that I can’t leave without the chocolate.

Now I just have to decide what other flavor… flavors, we want. Logan’s not there to choose, but I have learned that where he’s concerned, coffee is always a safe bet. So that’s the two flavors, right? But how can I leave that pumpkin spice, behind? Or the salted caramel? I have some extra space in the budget, but only enough for one more. I must choose. As I grapple with my choices the man behind the counter helpfully points out that the pumpkin spice will go away at the end of the season, but the salted caramel will always be there for me. That does it. I got the pumpkin spice.

I realize this is a very long post, but bear with me, this is important. The people at CHIC are great, their products are great, their establishment is great. They have this amazing comfy couch that’s big enough for like nine people to sit on at once as well as outdoor and indoor tables. It’s this amazing place to hang out and eat ice cream, or to grab ice cream and go, your choice. The people are so friendly and nice and helpful; every time I go in they make me smile. If you hadn’t guessed already, their ice cream is amazing. You can get it in a bowl or a cone or a milkshake and they’re super not stingy with their portions. You get two scoops and they don’t have to be the same flavor. Their scoops are not small, either. Their prices are reasonable and it’s so, so worth the trip from where ever you are.

I know it’s getting cold and you’re probably not thinking about frozen delights right now, but think again. If you’re in Beaver County, go check them out. If you’re in the greater Pittsburgh area, go check them out, I promise it’s worth the drive. Get a freezer bag and some ice packs and stock up. It works well, I’ve discovered. These are some really great people who are doing the best that they can to make it in a place that could really use the cheer. They deserve your support, and you deserve some ice cream.