So as you all know, we moved last week. Well, technically the week before that, but it feels like last week, so we’ll go with that. We picked the absolute coldest Saturday of the year thus far to move from our apartment of two years to our new home in a house that we plan on staying in until we can afford to buy one of our own. It was kind of an intimidating move. Luckily we have been blessed with all the amazing friends and many of them came out to give us a hand.

Saturday morning found Logan and I up early so we could finish some last-minute packing tasks and get the house ready to have people in and out of it. Logan went over to shovel and salt the sidewalk and I stayed home to strip the bed and pack up the rest of the bathroom and some dishes we still had hanging out. As I’m packing up my computer I found, the charging cable for my camera which, I kid you not, I had been looking for all year. A literal year I had been looking for that charger and you know where it was? In my computer bag. A completely reasonable and logical place for it to be where somehow I had overlooked it for an entire year. You find a lot of things when you move. You also lose everything after that, but we’re not there yet.

Representing the Fulk family at our moving day were Michael and Tali who were among the first to arrive. Michael is a master of moving trucks, apparently and graciously agreed to drive ours. So the guys went off to grab the truck and the girls looked around the house for more things to pack. As if by magic, once the truck had arrived outside the apartment so did all our helpers and like clockwork things were being shuttled out box by box to the truck to be expertly packed by Michael who is also a professional packer, according to his wife. I didn’t actually see it myself, but I believe it. Not one thing was broken in the entire move. 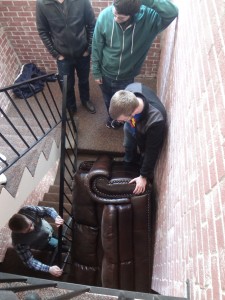 Once all the boxes that were going in the truck had been loaded up the hard part began: moving the couch out. The couch is very large and very heavy. It’s a great couch, but moving it is the worst. They may or may not have taken out an emergency light in the hall trying to get it in to the apartment. Getting it out was going to be an adventure. So like four strong guys grabbed our couch and started maneuvering it out of the apartment and down to the truck. The thing about the apartment is it’s on the third floor. Sure, it’s only three flights of stairs instead of the six it could be, but still, it’s a narrow stair well and the couch is big. At least they had gravity working with them this time. By some magic they got it stuck only once at the bottom of the second flight of stairs and managed to get it unstuck by sheer brain power soon after. Once the couch was out and in the truck the hardest part of the move was officially done.

My job in all this was director. I managed to get out of moving anything heavy or being in the cold for longer than two minutes, which was awesome because it was freezing. I sorted through what was left lying around the desks and then grabbed my girls and went over to the new place to set up food and hot drinks for when the truck arrived. We brought over the remaining fragile boxes and, of course, Alonzo the Aloe plant. 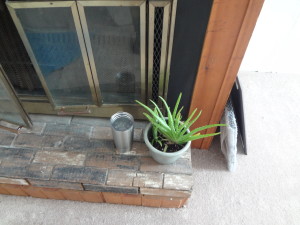 We moved some of the fragile boxes in but soon the guys were arriving with cars packed with other boxes and things to bring in and they took over, shuttling in their car loads. The truck arrived, eventually, having had some issues starting. I feel like the biggest adventure we had in moving was fighting to start that stupid truck. Anyway, once the truck party had arrived we ate lunch and then the daisy chain was formed.

Instead of all the guys anting it up, grabbing a box and carrying it all the way up the house and going back for it, the set up was thus: two guys inside without shoes so as not to get the carpet all wet, and seven guys outside making a daisy chain up the sidewalk, passing boxes along so that they only had to move a little while carrying the heavy boxes and things. Much less running around and very efficient, though my husband was going up and down the only flight of stairs we have outside and was super feeling it the next few days. I again directed the flow of boxes inside to where they needed to be. I learned that my labeling was less helpful than I had thought as half the things labeled study were actually going into the square hall. But we got the boxes all in, the furniture to it’s places and the truck emptied.

We’re were so super blessed by all the help we had. My mom and mom-in-law unpacked my dishes and ran them through the washer, made our bed and helped clean everything up after lunch. They were super awesome. Tali, long after everyone else had called it a day, was still volunteering to help anywhere and everywhere she could. She even unpacked my books and organized them with the help of my brother. I honestly have no idea where 13-year-olds keep all that energy. But seriously, I can’t thank the people who helped us enough. From all the movers to those who brought food and just helped keep me sane, you guys were so great and I’m so thankful to have all of you. 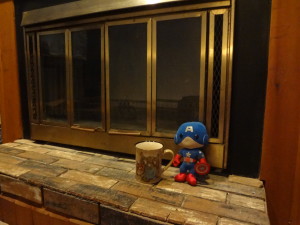 So we’re in! We are living in a house! We’re turning in the keys to the apartment tonight after like a week of cleaning and clearing and then this will be it. Our only place. It’s pretty quirky, but we like it. We’ve got a fire place and a brand new dishwasher that is super quiet and actually gets the dishes clean! We’re still fiddling with furniture and figuring out where things are going, but that’s life, really. We’ll figure it out. I’ve already put together one new piece to fill out our space and I’m excited to get more things to help make the house our home. Wish me luck! And I hope you all have a lovely day, my friends.

‹ Our Story: Also Known as “Purple and the Geek” Delay Due to Cats ›

One thought on “Moving House”