In Honor of Alan Rickman

I don’t usually do this. I don’t make a habit of following celebrity lives, investing myself in their business and commenting on their every move. Not that there’s anything wrong with following the actions of your favorite actor or super star or what have you, I’m just not that kind of person. I never could get truly invested in the lives of people I see only as someone else. So when a celebrity dies, generally speaking, I skim past it on my news feed and move on with my day with a mere, “Oh that’s too bad” to acknowledge it. Not so with Alan Rickman. Alan Rickman broke my heart. 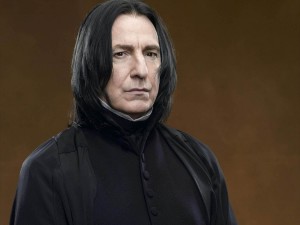 I’ll confess, haven’t seen many of his films. I first knew him as Snape, like most people of my generation, and moved on from there. I’ve seen him in Sense and Sensibility and in Galaxy Quest most recently and as the depressed robot from Hitchhikers Guide, but not many more if any. But he was one of those actors that you see pop up somewhere and it makes you smile, even if the role isn’t particularly cheery.  He’s the kind of actor that you see in a trailer and regardless of the plot, you want to see that movie, just to hear his voice. He had a great voice. 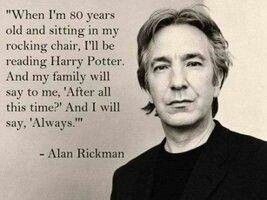 He was also one of those actors on whom you could find all sorts of fun stuff on the internet. Him speaking on helium, telling stories of filming and goofing off, he just seemed like a fun guy to be around and to work with, if you ever got the chance. There are few celebrities that I would really like to meet. If I had the chance to meet Alan Rickman, I would have jumped on it.

I have enormous respect for tv and movie actors who have also done significant stage acting. Stage is the hardest place to act, in my mind. You have to stay in character, there’s not cuts or takes or pausing to regroup. You go through the whole scene and if you mess up, you fix it on the spot before the audience catches on and if you can pull it off, then you can laugh about it back stage. I would have loved to see Alan Rickman on stage. I imagine his stage presence was something to behold. 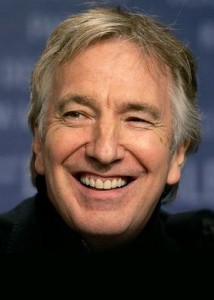 I’ll admit it: I don’t know a whole lot about Alan Rickman, his life, his loved ones, his likes and dislikes. I just know that every time I saw him in something it made the movie. I know that every quote from him was so eloquent it makes my writer’s heart ache. I know that he could be so funny and yet so moving. I know that he had cancer, and was still working on entertaining us. And I know that it is truly sad that he won’t get the chance to take on a new persona, to become someone else, and to charm everyone around him once more. Good bye, Alan Rickman and thank you for being you.