One Year as a Wife

This time last year I was freaking out trying to get everything ready for my wedding day. Why was I freaking out? Because I’m a terrible procrastinator and waited until the last minute to pack and print out all the programs and directions and such. That’s why. Anyway, in three days I’ll have been married for one whole year! That’s crazy!

So, I really want to tell all of you that I’ve learned so much in the past year and grown into this new person and found who I want to be and all sorts of things one expects from their first year of marriage. To tell you the truth, though, I don’t think I’ve learned all that much. Marriage is exactly what I expected it to be. There haven’t been any big surprises or anything. Just life moving forward as it always does only better than it was because I don’t have to leave the man I love at the end of the day. 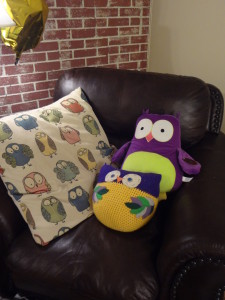 I sit on a throne of owls

I guess the biggest change we’ve experienced is just settling in. This time last year we didn’t have a TV or TV stand, we didn’t have end tables or a coffee table or bedside tables, I didn’t have a place to put my clothes or a desk to write at or shelves to put my books on. We’ve settled in. I’ve taken over the comfy chair and surrounded it with my yarn and crochet hooks and needles and filled it with owls. We’ve decorated the walls and found places to put everything and we are thoroughly settled in, even though we were reluctant to do so for about six months. We’ve got our routines, our regular stores and our usual take-out place. We have a favorite park and a local comic book shop. I’ve even finally got a library card for the area! We are completely settled in.

We are learning to do things together and apart. As it is with many newlywed couples the excitement of living together comes with the thrill of being together all the time. Last year I would hover around our very tiny kitchen while my husband would cook. I couldn’t really help because A) tiny kitchen and B) I don’t really cook, but I wanted to be near him and hear about his day and everything. Now, unless he asks me to help in some way, I return to my chair and wait for dinner to do all the chatting. It’s much easier to have a conversation with somehow who isn’t flitting about cooking all the things at once. My husband feels bad spending time away from me after he spent all day at work away from me. I think it’s very sweet, but I often have to convince him that it’s okay for him to go in the other room and play computer games for a couple of hours without me. He recharges by being alone and while I know I don’t count as a draining social force for him, he still needs time to himself once in a while. We’re learning to find that balance between his needs and mine.

Now I know what you’re thinking: “Alright, Purps, things sound good, but surely you’ve discovered a plethora of things about him that annoy the crap out of you, right?” Well, sort of. I wouldn’t say plethora, except that it’s a fun word and I like using it. The reality is, right now I can only think of two annoying things: one I mentioned to him and he doesn’t do anymore, mostly. The other isn’t all on him. We, as a couple, are really bad at cleaning up. Like really bad, especially after dinner. We cook and everything is left all over the place. And while it’s true that he does the most cooking and therefore the least cleaning up after cooking, I can’t really complain against him as I do the exact same thing. We as a couple are apparently really bad at the cleaning.

I have discovered about myself that I hate the kitchen. I don’t know if it’s just our kitchen or kitchens in general, but I really don’t want to deal with the kitchen, ever. I will happily clean the bathroom, the living room, even the bedroom more willingly than I will tackle the kitchen. My husband, being very sweet, has taken it on as his own area of the house to clean, even though he doesn’t much like it either. I’ve discovered that I really want to be the crafty person my mom-in-law is. I’d also like to be able to bake things the way a certain friend of mine does. I would love to be the ideal housewife and do all the good housewife things. I’ve also discovered that my husband would not love me any more if I were the ideal house wife than he does as I am right now. I’ve discovered that no matter what I choose to do with myself he will love me just the same.

In the last year I have learned that I am married to the coolest guy ever. I’ve learned that we have the coolest marriage ever. We read comic books for our date nights and watch bad movies for fun. He buys me steam games as a romantic gesture and brings home cookies from this amazing bakery near his work. He still takes my computer bag like he did when we first started dating so that I don’t hurt my shoulder carrying the heavy things. He is the sweetest, most wonderful man in the world and he’s mine. It’s been almost one year since I married my favorite person and guess what? He’s still my favorite person.

‹ Thoughts on Patriotism Twelve Things I Love About My Husband ›