Adventure Time with the Farki

Good afternoon, dear friends! You may be wondering why today’s post is coming to you in the afternoon when many of you have already had your hot beverage of choice and may have moved on to a second or third cup of said beverage. Well, today I’ve been having adventures, which is a thing that happens a lot when I go places. First, a few explanations.

Farki is the common, but incorrect plural form of Farkas, my maiden name. Once a Farkas there is no escape. you will be a Farkas forever. Today I have been adventuring with my dad, making us Farki for today. The proper plural is Farkasok, but no one knows that unless they speak Hungarian. Farki is  also generally easier to say. So we are the Farki when we are plural, which we often are.

Second, adventures. These are generally defined as new or unexpected events or trips taken by us at any given time. Sure, that doesn’t sound like a grand definition of adventure, but we like to define such things in an epic way. It makes life more exciting.

This morning I decided to drive up to my parents place to hang out for the day. As usual, I didn’t think to check if they were doing anything before I came up, I just did. I had two initial reasons for this impormptue visit. One, I bought a hanging basket for my mother which was slowly dying in my living room. Not enough sun, probably, maybe a watering problem, I don’t know. I’m not good with plants. This is why mine are all fake. Anyway, I wanted to bring it up sometime soon and I knew this would be my best chance to do so. The second reason was the tiny kittens that now live there. I have been wanting to snuggle them ever since they first appeared in pictures on my sister’s facebook and now I can finally snuggle all the kitties. 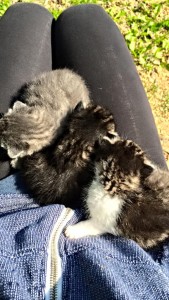 So, my plan had been drop off the husband, stop by Dunkin Donuts for an iced coffee, drive up to the parents’ house and snuggle baby kitties while writing my blog for the morning then hang with the parents. When I arrived at home I snuggled kitties and then learned that my parents each had errands planned for the morning and I had my choice of adventures. This is a hard choice which I’ve never had to make before. I don’t generally have to choose between my parents and it’s a rather awkward situation to be in. My dad asked first, though, if I wanted to go with him and as I don’t often hang out with him, I found myself climbing into the old truck for high adventures of the recycling kind.

The actual adventures are probably less exciting than in writing than they are in my head. We drove the slowly dying truck down to the recycling plant without losing anything out of the back which was left open to fit all the cylindrical containers. Luckily the garbage cans fit inside each other like nesting dolls so the drive after that was much less precarious. After emptying the paper, glass and plastic we moved on to the farm market to get plants for my dad’s garden. We found tomatoes, peppers and several flowers. This is how I know my dad loves me; he found a purple pepper plant and bought it just so see what it was like. He also looked for some jalapeno plants because they’re my husband’s favorite. They didn’t have any, but he’s planning on looking at a near by flea market soon where we found some last year.

We ended our morning of adventures with a trip to Walmart, of course, for odds and ends and random food stuffs. He helped me find a mesh drain cover to help keep our shower drain clear of hair and such, since I have all the hair and no way to keep it out of the drain. So that’s one thing off my list.  We then went to the Hot Dog Shoppe, of course, because it’s my favorite place and we don’t have any down near us. It is a very sad thing, but dates with Dad are always good.

So there you have it, my morning of adventures. The rest of my day will be spent cuddling tiny kitties, probably and maybe writing things. And getting fresh air, which is always good. It’ll be a lovely day. 🙂

‹ Back to Running Disney Problem ›