Good morning friends. I know it’s a Friday and I usually don’t do make up posts,but I felt really bad about not posting yesterday when I woke up this morning and realized that it was Friday and not Thursday. I don’t know why it didn’t occur to me that it was Thursday yesterday and I […] 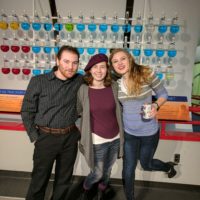 Good morning friends! So this past Friday we took a trip to the Carnegie Science Center with my siblings for their 21+ night. Logan and I have been wanting to go to one of these for a while now, basically ever since I learned they were a thing. We really wanted to go to the […]

Twelve Things I Love About My Husband

I have officially been married for twelve whole months now! That’s twelve months I’ve had to live with my husband, get to know him, learn from him and just enjoy his presence. So to celebrate those twelve months, I’ve decided to list twelve things I love about him that I discovered in the twelve months […]