Good morning friends! So this past Friday we took a trip to the Carnegie Science Center with my siblings for their 21+ night. Logan and I have been wanting to go to one of these for a while now, basically ever since I learned they were a thing. We really wanted to go to the science of beer night they had a few months ago, but they sold out pretty quickly for that one. Friday night’s theme was Glow, which is much less exciting, but still an excuse to go to the Science Center, so we took it.

I haven’t been to the Science Center since I was in sixth grade, so I was pretty pumped to go back. Sure, you could get drinks and stuff while you were there, but I was mostly interested in the science. We met up with everyone, skipped the first two floors and started with the third where there weren’t quite so many people yet. We’d gotten there super early, but had to wait for my sister and her friends, and then a while longer for the last ticket to come through. So it wasn’t any less crowded, probably, than a normal day at the Science Center, but there weren’t any small children running around, so there was that at least. Not that I don’t like small children, but it’s much more fun for adults when they can play with all the displays without worrying about what kids are waiting.

So we started with the bodies. It’s kind of funny how differently you look at things when you’re a grown up from when you were a kid. I don’t remember looking at the body’s when I was a kid, but I imagine the ick factor was the big attraction. I definitely didn’t look at the endoscopy simulation and think “Hey, my husband just had that done.” like I did this time. The heart thing was still pretty cool, though, with all the different animal hearts and how they beat. I particularly enjoyed the face mashup screen where you sit across from someone and line up your faces. It was interesting to do with my siblings as we all look pretty much the same. There was only one display that really disappointed me and it was the sound buttons that asked if they could trick your ears. You were supposed to push each of three buttons to see if you could identify which was the sound of frying bacon. Spoilers! None of them were the sound of frying bacon. This is a place for kids, why are they setting them up for failure? Also, why deny us the actual sound of frying bacon? 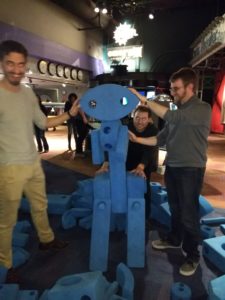 So we moved up to the energy floor where we could light up a light bulb by touching two metal balls and hook up circuits to make lights light up or buzzers buzz. My husband so badly wanted to set off both buzzers in one circuit, but it failed if you hooked up more than two stops. So You could make the buzzer go off, or the buzzer controlled by a button, but not both buzzers at once. They also stopped after a short time so he couldn’t just leave them going and walk away. Probably for the best. We soon discovered foam building blocks. It was very important that we build something with them. The guys decided a robot was the logical choice for a building project and thus began to construct it while I handed pieces over and took pictures. They succeeded in building their foam robot, but he wouldn’t stand up on his own, so he was promptly destroyed as soon as they let him go.

We fooled around with the kids play equipment, because we could, and then headed down to look at the robots. My favorite was the robot that shot baskets and then did a little dance when he made it. I’m sure he probably would have danced, even if he hadn’t made it, but he was also probably programmed to never miss, so there’s that. Anyway, I thought he was super cute. There was also a robot playing air hockey with people and one making pictures that people drew for him with little balls for pixels on a grid. It being 21+ night, you can imagine what was drawn half the time.

We went to a show about light which I half expected to be a light show, but it was not. It was a guy in a red lab coat teaching us about how light waves work and the visible spectrum and why we see things the way we do and such. It was really neat, actually, but not what I was expecting. Our night ended with the water section where we played with the rain maker and the water flow table with all the boats. We looked at some fish and played the the sand table that shows how rain flows on different elevations, I guess. You could make it rain in the projection by holding your hand over it and watch the blue spread over the sand. It was pretty fun, though not as cool as some of the ones you see in videos.

And that was our night at the Carnegie Science Center. I feel like I would definitely do it again, but it might have to be a while so that everything can be new and cool again. My brother found a list of 21+ nights around Pittsburgh, though, which I haven’t actually looked at, but if they’re all as cool as the Science Center, I’d be willing to give them a shot. It could be a fun thing to do with my siblings on a semi-regular basis and I’d definitely be up for that. Until then, if you have a chance to check out the next Science Center 21+ night, do it, it’s a lot of fun. Have a lovely day, my friends!

‹ A Surprise Dentist Adventure One of Those Days Ramble ›