Good morning, friends! We’ve made it to 32 weeks as of today, which is practically the safe zone for twins. Their chances of surviving if they’re premature at this point are super high and their NICU stay shouldn’t even be that long! We are, of course, working under the assumption that they will make it to 37 weeks, while also expecting that they will have to spend some time in the NICU. It would be awesome if we could do a vaginal birth and not have any NICU time so they could stay with us the whole time, but that’s not super likely, though it does happen.

I’ve been on a crafting spree recently. It’s a thing I meant to start a while ago but kept getting pushed back. I wanted to start a blanket when I found out I was pregnant and work on it all through so they would have it when they were born and I could tell them about how I made it for them while I was praying for them and all that. The first trimester was good for nothing except sleeping and watching Netflix on the couch, so that didn’t happen. Then we had the big Twin bombshell and that sort of threw everything into chaos for a while and then suddenly it was the holiday season and I had a million other things to do besides sit and work with my hands. I still have lots of stuff I could be doing, but I am also huge and don’t feel like moving all that much. I’m in that awkward spot where I’m not necessarily too tired to be productive, it’s just too hard to lever myself out of my chair and get things done. It seems like every time I try to clean the house I end up miserably out of breath and achy, so I sit down again after picking up like two things and go back to knitting.

This is the great thing about knitting and crocheting, I feel productive, but I don’t have to leave my chair. I like that I can work on things for the boys without having to get up and move around a lot, since, as I said, it’s really hard now. I can’t even vacuum, it’s depressing. I’ve been meaning to take down the tree, but the thought of that much up and down movement to take ornaments off is not appealing. Knitting, on the other hand, takes no up and down movement at all and still feels like I’m doing something important.

I really enjoy knitting, but I’m always in a weird place with it. I love making things, but I’m terrible at making things for myself, but I’m also really self-conscious making things for other people, so who do I make stuff for? I have made stuff for other people, but it’s been a while since I’ve had an excuse to do so. I think that’s why it took me so long to get started on stuff for the boys, it felt weird making things sort of for myself, but not really. I’m also a terrible procrastinator, so there’s that. But, we only have five weeks left, so I had to get myself in gear. It’s been surprisingly easier to make things for the boys than I thought it might be. I’m pretty pleased with how I’ve been keeping up with it thus far. 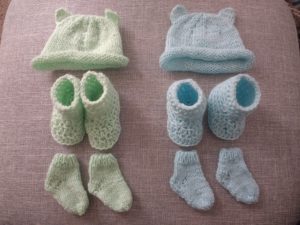 Currently I have achieved a two bear-ear hats, two pairs of booties, and two pairs of newborn sized socks. I’m a little nervous about the socks since they look so small, but we’re also expecting the boys to be small, so I think it should be okay. We’ll find out, I guess. The good thing about making things for tiny boys is they don’t take very long. I knitted three socks the other day and probably could have gotten through most of the fourth, but I decided to hold off for the night. They only took me like an hour or so to make and the pattern is really easy. Makes me hopeful that I can make bigger socks too, eventually. The weirdest thing, I guess, is that I was working with very few stitches on long needles. I kind of felt like the needles were getting all tangled together because there wasn’t much to space them out. It made starting kind of hard, but once I got into them it wasn’t so bad. I’ll be honest, there’s part of me that just wants to make tiny socks forever now.

So as tends to happen when I’ve been doing simple, get back into the swing of things projects, I start to feel confident and ambitious. There is a big part of me that really wants to take on a tiny baby sweater. That being said, there are a few things holding me back. The last time I attempted a sweater it was crocheting, which I am much more familiar with and have more practice doing and I still failed. I could not figure out what the pattern I liked was trying to tell me to do and I couldn’t find one that I liked as well and eventually the whole thing fell through. This time I’d like to try knitting a sweater, but I still need to find one that I like that looks simple enough for me to try and also I need the yarn to do it. I have a skein in blue and one in green that I bought for each of the boys, but I’ve also been making tiny things out of said yarn, so I have less than a skein for each project at this time. I don’t want to start a big project not knowing how much yarn I’ll need only to run out and not be able to find more of the same yarn. Since I got this yarn at Hobby Lobby I’m not sure I could find it again as we only have a Michael’s and a Joann Fabrics here. Buying more yarn also requires actually going out and as mentioned about, moving is hard while carrying two babies around. By my apps calculations they should be four pounds each, which is eight pounds of baby, total. So there’s that.

Today I think I will work on little mittens for the boys. They have head gear and feet gear, they could probably use some hand protection as well. I’m really hoping they won’t come until it’s warmed up more, but you never know with February and PA weather. It’s supposed to warm up again this coming week, but it’ll probably just plummet again the week after and dump more snow on us for good measure. Ah well, we’ll just have to wait and see what’s in store. Maybe I’ll go out with my mom to get more yarn for a big project. I’m not sure if I’ll have enough time to finish a big project for two boys, but we’ll see. It’s probably worth a try. After all, I’m not doing anything else with my time right now. Enjoy your productivity, my friends, and have a lovely day!