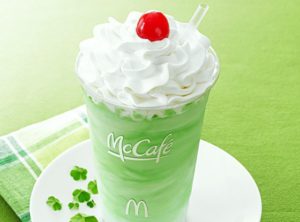 It’s March, guys, and you know what that means? Shamrock shakes are back at McDonalds. Okay, there are lots of other important things about March: spring is almost here, Lent started, which means fish fries are a thing again, daylight savings time starts up again… or ends again? I’m never sure which. Anyway, lots of stuff happening, but the big thing, is St. Patrick’s Day.

This is not a post about St. Patrick’s day, actually. We’ll talk about that later. This is a post purely about that annual tradition which is for a certain fast food chain to dye a milkshake green and sell it to people who are run on nostalgia, like myself. I’m sure there are people who actually just really like shamrock shakes, but I would be willing to bet for at least 50% of people who buy this drink it’s a nostalgia thing, growing up getting one every year. At least, that’s how it is for me.

We were always super pumped for March and the shamrock shakes. I remember going to the local McDonald’s with my siblings all piled in the car to go through the drive-thru with my dad just to get shamrock shakes. It was an outing all its own. I think it’s probably because it’s a thing we did with Dad that makes the memory so potent for me. I always remember the shakes being super great, but in reality, I was just pumped to do a “dad” thing.

I made this discovery last year, as my husband and I were still working on settling in to our new house and adjusting to having our very own cats. Calamity had some mild stress issues after the move and we had to run back to the vet to pick up some eye-drops for her. Now, my husband worked at McDonald’s in high school and part of college. As a result, we don’t eat at McDonald’s unless absolutely necessary. However, when I said I really wanted a shamrock shake, for nostalgia purposes, he very graciously agreed to go and get some on our way home. The result? We each drank an okay milkshake that was not nearly as good as I remembered it being, and I ate some fries, because you have to have fries with your milkshake.

I had never realized before how mediocre they were. And yet the nostalgia factor is strong. Even now, as I’m writing about milkshakes that are merely okay, I’m also debating on if I could get one this week. I seriously considered grabbing one on Saturday on my way home from a baby shower near my parents. It was freezing, though, and I decided a milkshake was not what I wanted just then. I know they’re not good, and they’re not good for you. The calories in the milkshake alone probably equate to a days worth, but I seriously still want one. They’re mixing them with chocolate now, did you know? They have like half shamrock half chocolate milkshakes and I also kind of want that. It’s like nostalgia and my favorite thing mixed together. I’m not sure if it’ll be as great as I think it is. Scratch that, I know it won’t be as great as I think it is, but still, worth a shot.

So I’m thinking I’m going to go for it, next time I take Logan to work, probably. I can stop on my way home, or run out and get one during the day or something so he doesn’t have to get one with me this year. I love him and don’t want to impose that horror on him again. There is part of me that would like to just try making our own from scratch. It would probably be at least a little better, right? But it wouldn’t be quite the same, now would it? It’s like box mac and cheese. Homemade is so much better, but sometimes you just really want the crappy powder stuff. The call of the nostalgia is a strong one. I hope you are also enjoying your nostalgic beverages. Have a great day, dear friends.