Christmas Time: Cats under the Tree

Good morning friends. I was going to try and write about wrapping presents today, but I haven’t actually wrapped any presents yet. Scratch that, I’ve wrapped one present, but that was super early because my best friend was in town for Thanksgiving, but wouldn’t be in town for Christmas so I wanted to give her her present while she was here. Aside from that, no wrapping has been done, but should be done at least a little bit today and maybe tomorrow, so we’ll get back to that on Friday. In the mean time, let’s talk about my cats.

I really am sorry if you’re sick of hearing about my cats by now. However, if you’re still here after all the cat talk already I’m going to assume you’re probably here to hear about my cats, as that is all I talk about. This is our first Christmas with cats of our own and I’m pretty excited. Okay, so we technically had cats last year too, but they weren’t here with us and we were also still in our little apartment. This is the first Christmas in a house and with cats in that house. My experience with cats and Christmas has varied through the years. Some of my family’s cats have been very good with the tree and decorations and such, some have decided they live in the tree now. So I didn’t really know what to expect last year when my girls got their first Christmas experience.

They are actually rather well behaved, for the most part. They were really good with the tree at my in-laws and didn’t seem to bother anything out of the ordinary. With that in mind, I wasn’t too worried putting up our tree. I kept the squirt bottle handy just in case, but haven’t had to use it yet. They don’t seem interested in climbing it, but Pearl does want to chew on it occasionally. She’s a weirdo. They did get one of my ornaments down and tripped off some of the little shiny bits, but that was easily fixed. I’ve just moved it higher on the tree and they leave it alone. Aside from that they’ve been very good girls. 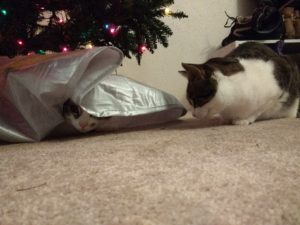 While they leave the tree itself alone for the most part, the tree skirt is an entirely different matter. Of all the things I thought to worry about, the tree skirt was not one of them, but there it is, their favorite thing to mess with. Pearl especially enjoys crawling under it and chilling there. The one night she just laid under there, happy as could be, until Calamity came to attack. Then Calamity got under there and Pearl was pouncing on her. It’s good fun to watch, but I do have to fix the skirt every couple of hours. I have a box sitting under there now, so they haven’t disturbed it in a while.

I’m really impressed that they haven’t torn my tinsel bowl apart. Every year I set out a bowl filled with tinsel and silver bulbs for decoration on my coffee table. Other than the obligatory chewing on the loose bits, they haven’t bothered it at all. Yesterday Pearl stole one of the ornaments to play with, but that was because it had been set on the floor while Courtney and I were eating pizza. They haven’t tried anything like that while it’s on the table. I fully expected there to be tinsel strewn across my living room in the first day, but I was pleasantly surprised.

I am hoping to get our cats presents this year. Then again, I was also hoping to get them some stuff anyway, so I don’t know if it counts. I really want to get them a little cat tree to play on. Preferably a box like one so they can go in and hang out or climb on top or scratch it up or whatever. We tried a covered litter box when they first got here, but I was concerned they would be afraid of it since it looked a little like the carrier with the lid on. It was also round and that was weird, so we got rid of the box. But we still have the lid and they do like to play in it. Part of me wonders if I could just modify it to be a fun cat play thing, but then I wonder if it would be any cheaper than just buying one from Target. So we might get them a cat tree, I definitely want to get them a new toy of some kind and some more cat nip, because they like that and we’re running out.

I’m very thankful for our cats and their good behavior this holiday season. I’m thankful just to have cats at all, really. Life is so much better with cats. Enjoying the tree is always nice, but it’s so much better with a lap full of warm kittens to keep me warm. There’s a small part of me that kind of wishes I had gotten them stockings, but I ran out of hook adhesive strips anyway, so it wouldn’t have mattered. At any rate, we’re having a lovely holiday season with our cat friends. I hope you are too, my friends.