It’s that time of year again, dear friends. The time of year when we break out the cloak and corset and go to the Pittsburgh Renaissance Festival! This has been a tradition since I was a junior in high school. I have since started dragging my husband every year, bribing him with honey. It’s been working out pretty well. Most years we go towards the end of the season, but this year we found our only free day for ren fairing happened to be labor day, so that’s when we went. 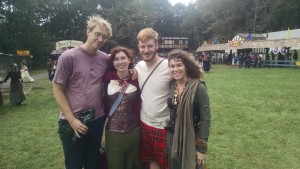 The best part of going to the ren fair is dressing up, even if I am usually the only one who does. I have been slowly evolving my ren fair outfit over the years, adding and adjusting pieces as I go. I always wear the same green skirt, and once upon a time I had one of those super flimsy costume maiden dresses you see come out around Halloween that have all the ruffles, but definitely should not be worn on their own. It got eaten by my closet back home at some point and was never seen again, even after said closet was cleaned out, thoroughly. It was replaced by a pirate costume of similar make with the black satin vest part sewed in. I separated the red stripy bit from the black so I could have the long vest part without the dump looking fabric over my skirt. And thus was my costume for a couple years until I bought a corset of my very own. This is something I have wanted my whole adult life and I finally got one! It’s a bronze and brown striped steampunky type thing and I am quite fond of it. I added it to my costume last year over the pirate costume.

This year I went with a husband shirt under the corset because, I’ll be honest, I forgot about the pirate costume and I’m not sure where it is. I also added a bustle skirt that a friend made for me earlier this year, which had enhanced many a costume this past year. I also modified my skirt to with pick-ups on either side held in by safety pins. Well, one side was held up by safety pins. The other escaped at some point before we got to the fair and I just tucked it in to my waist band and hoped for the best. It was hot this year, so I was hoping to be a little cooler with the shorter skirt and a little more eye catching design. It must have worked because I was complemented twice by fair workers this year. I also found someone wearing the same corset. Over all, I was quite pleased with how this years outfit turned out.

Over the years I’ve gone to the ren fair with lots of different people. I find the best years tend to be core groups that stick mostly together. I’ve tried a hodge-podge of friend groups before and it always ends with me in the middle of people going everywhere and getting to hang out with no one, really. I have found it’s best to pick a group and go. It’s not a guarantee that people will stick together, but you are far more likely to reconvene more often that way. Also, the smaller the group the better. The past two years we’ve gone with our D&D group and my brother. Last year we happened upon a group of my Geneva friends, which was lovely as I got to hang with them a little bit, but didn’t feel too bad when we got separated.

This year’s entertainment was Cast in Bronze, as usual. He plays a carillon, which is an ancient instrument composed of 23 large bells that is played by striking keys attached to each clapper. It’s actually really cool to see. He plays in concert with other instruments and it’s really lovely to listen to. We also watched a really nice fire manipulation show which was pleasantly not crass as some of the shows can be. We started the day with the Duelists whom we saw last year when it was too slippery on stage for them to do their usual bit. The general consensus was we liked them better last year. Due to the wet conditions they instead talked about the weapons they use and the history behind the dueling practice and the items involved. It was really neat. Their usual bit is the ten steps of dueling in the renaissance style, which was kind of funny, but not nearly as cool, and much more crass. So, apparently they’re only worth seeing when it’s damp.

We skipped the joust pretty much all together this year. I’ve been going to the fair for eight years now and the joust is always basically the same. I wouldn’t have super minded going to one of the shows, but not the last one. It’s such a pain to get out of the parking lot if you wait until the very end. Of course, if you book it out after the joust ends you can usually get out okay, but it’s kind of a risk. I also didn’t get any roasted nuts this year, which was sad, but my brother shared his with me, so it wasn’t so bad. My husband purchased his usual pound of honey, and I got a little version of Sting from The Hobbit and a new hair stick to motivate me to grow my hair out again. We’ll see how that goes. I could have gotten a comb, but I can never get them to work for me.

We ended our grand ren fair adventure by going to Cracker Barrel, because it is a wonderful place full of happiness and puzzle games. There also happens to be one on the way home, so it’s a convenient stop. Over all, I would say this years ren fair adventure was quite successful! I hope your Labor Day weekend was enjoyable as well, dear friends!