So for starters, did you know you can flavor your coffee with cinnamon? It’s true! My Twirly told me about it when we were in college, for when we didn’t have creamer, but we had milk so it still tasted like not black coffee. It’s great! We stopped getting flavored coffee a while ago because trying to get up to the coffee shop is a pain and it’s cheaper at ALDI. I don’t mind the dark roast that Logan enjoys, I drink it with creamer anyway, so it’s not a big deal, but I recently remembered that the cinnamon flavoring is a thing and that I really liked it, so I’ve been doing that for the past week or two and it’s lovely. You should all try it. You just put a dash of cinnamon on the coffee grounds before you start up the machine. Go, try it, it’s wonderful. I’ll wait.

You’re back? Did you try it? Amazing, right? Good, moving on. I went to a concert last night with my brother and my husband and it was quite lovely. Not a great concert experience over all, but a great concert nevertheless. I’m not very good at concerts, really. I’ve only been to a handful in my life, most with my in-laws, come to think of it. I went to maybe two at my parent’s church growing up, we went to Creation Fest one year with was a giant string of concerts, then Tenth Avenue North, Switchfoot, and Weird Al in the span of three years. I might be forgetting some, but I think that’s it for major concerts I’ve been to. Last night I added Lindsey Stirling to the list. 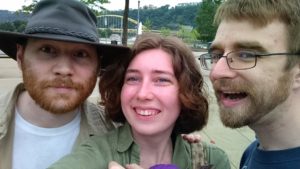 So I don’t know anything, really, about going to concerts. My husband has gone to a bunch with this dad and sisters, but this concert was a little weird and we’d never been to the venue before. My brother is likewise unfamiliar with how concerts work, so we’re all pretty bad at this. We did get there an hour before doors opened, though. We waited in line and caught Pokemon by a Pokestop that was conveniently located beside us for an hour, then slowly moved to the front of the line. That’s where I learned you’re not allowed to take blankets into Stage AE… or umbrellas, apparently. So I went for a run back to the car before we could get in. So much for being early.

Anyway, we made it in and found a pretty good spot on the balcony where we weren’t supposed to be. In that spot, I mean. We were allowed on the upper level, just not in that particular place by the risers. Something about leaving a path. Ah well. So we went down to see if we could see better there and passed by a familiar figure. A friend of mine from high school, who I haven’t seen in a few years now at least, was at the concert too! I saw her walking by the second floor railing once we got down on the first floor again and very awkwardly abandoned my guys to run up and say hi. Because I’m a creep and this is what I do. It was really good to see her again, though, and I was super excited to run into her.

Apparently another friend of mine was there, but I didn’t see her, despite being actually pretty close to where they were standing. Which is sad because she was with her boyfriend, whom I have yet to meet, and I would really like to meet him, again because I’m a creep and this is what I do. Ah well, probably best not to meet him in a crowded concert venue with loud music playing. 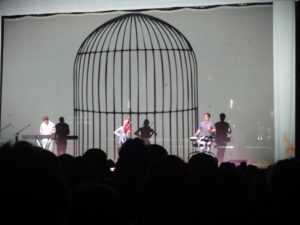 So I told you we’re really bad at this, right? Because we are, really bad at concerts. We found a place in the back of the crowd, too far back to really see anything, but that’s the best we could do. I probably could have wormed my way closer, but my guys are definitely not that into people, my husband especially. So we hung back and watched through gaps in heads, which was a little disappointing as Lindsey Stirling is a dancer as well as a violinist and she’s pretty great at both. I did take lots of pictures over people’s heads so I could kind of see what was going on. I’m a little miffed that they didn’t have the side screens on like the did for the opening act. Wouldn’t it make sense to have those one for the main event so people could actually see what was going on? Especially with such a visual performance? Whatever Stage AE. Regardless of our lack of view, the music was wonderful and Lindsey is a lovely human and it was a treat to hear her speak, as well as play.

I would definitely like to see Lindsey Stirling in concert again, maybe next time when I can actually see her. I think we could handle it now that we know what we’re doing a little better and I know not to bring a blanket into a concert. There’s another concert coming up at Stage AE with a band that my husband is very fond of. I’m not sure if we’ll try to go to that one, after the experience with Stage AE this time, but you never know. We’ll just have to wait and see. I hope you all have a lovely weekend, my friends.

‹ Rain on My Tomatoes What I Did at Camp ›