Happy St. Patrick’s Day, dear friends! When I was little I thought this holiday was meant for my brother since his middle name is Patrick. I have since learned better.

Being Irish has always been one of my favorite parts about myself. Growing up that was the only nationality I really latched onto. That and the possible Native American heritage that may or may not be on our side of the family. I thought that was awesome as a kid. As I grew up I learned that we have a lot of nationalities in our family, but the Irish side remains my favorite out of the long list of cultures we came from. I realize now that we are far from being “half Irish” as I used to assume since my mom is part Irish and my dad is also part Irish and two parts Irish equal half, right? Kid logic is a funny thing. But when I’m asked about my genetic background I still mention it first.

Yesterday I celebrated St. Patrick’s Day a little early with my mom, mom-in-law and sister-in-law by eating corn beef and cabbage and Irish soda bread and watching Irish movies. We started with my personal favorite The Secret of Kells. I have a thing for Irish mythology and monastic life, and The Secret of Kells has both. It’s an Irish animated movie done in a very similar style to the illuminations of ancient texts. The movie is about a boy who lives in a 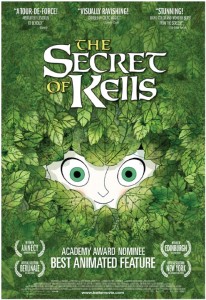 monastery with his uncle, the abbot, during a time of invasion from the north. His uncle is obsessed with building a wall around the monastery, Kells, in an attempt to protect it. Our hero, Brendan, has never been outside the walls until Brother Aidan comes to Kells, running from the Norsemen and carrying the Book of Iona, a manuscript started by St. Columbkille himself. It is said to be so beautiful that sinners are struck blind by the site of it, but it’s not finished, and Aidan needs Brendan’s help if it’s to be completed. When Brendan braves the forest outside he befriends a strange girl named Aisling who shows him how to get around and find what he’s looking for.

The Secret of Kells is a beautifully animated, careful mix of Ireland’s mythic and Christian heritage. The movie balances the implication of Christian faith with the magic and mystery of the forest really well. It feels in no way disrespectful to either side of Irish history and raises neither up as being better or more true than the other. I love that there is peace between the two. There isn’t any pushing of one idea over another, they’re treated as equally relevant and important. The style of the movie is beautiful, like bringing illuminations to life. Everything is made up of simple shapes and colors, giving it a flat, story-book kind of feel. In the simplicity of the style, the on screen illuminations actually pop, helping us feel the same awe the characters are feeling. If you have Netflix this St. Patrick’s Day, you should definitely watch The Secret of Kells to aid your Irish celebration.

The second movie we watched was Finian’s Rainbow, a musical from the late 60s. I have come to realize that American Irish movies are really special and I’m not sure if it’s an Irish thing or if it’s a musical thing. I’m going to say it’s probably a musical thing. Musicals with big name song and dance guys in them tend to be an excuse to cram as many song and dance numbers into a movie as possible, regardless of where the plot was heading. Top of the Morning with Bing Crosby suffered this as they just kind of made the plot up as they went along, following an ever-changing prophesy which would have spoiled the entire movie if anyone had actually known the whole thing before the end. Finian’s Rainbow falls into this same trap as the plot kind of gets lost for a while to make way from random songs about getting stuff that doesn’t go anywhere. 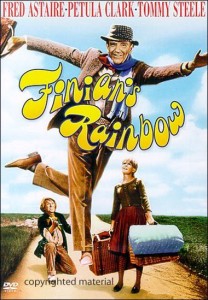 Rainbow Valley in America, conveniently located near Fort Knox with the intention of growing more gold from it. Because that’s how that works. Rainbow Valley is home to sharecroppers led by a guy named Woody who has a plan to get rich with little work by breeding menthol flavored tobacco, except they can’t get it to burn. Naturally, Fred’s daughter, Sharon, falls in love with Woody… because he’s there. There’s really nothing more to their relationship. They happen to be in the same place, so they’re a couple. Meanwhile the leprechaun whose gold was stolen has followed them in search of the gold which he needs to keep from becoming mortal. He too is in love with Sharon… because he’s there. Nothing comes of this. And, because it’s the 60s we have to have a racial equality plot line… I guess. So there’s a racist senator trying to buy up the valley… for some reason… who tries to make it illegal for blacks and whites to live together so he can clear out Rainbow Valley and buy it for himself. He gets wished black and learns nothing so the leprechaun changes his heart magically. Because that’s how that works.

So we have two get-rich-quick schemes which go nowhere, a bunch of greedy sharecroppers who buy a lot of stuff on credit with no consequences, oh, and a girl who can’t talk so she dances everything… because that’s easier than sign language, apparently. This movie was really weird and way longer than it had to be. The guys are all kind of creepy and the romance is out of nowhere and totally unbelievable. Seriously, she’s mad at him one minute and then all of a sudden she’s in the dance number about love, which started as the mute girl trying to tell them something. And not a bit of sense was made. I feel like it was trying to be an early 50s musical but the 60s kept seeping in. But, we had a good time watching it, so there’s that.

So, long story short, if you’re going to watch an Irish movie for St. Patrick’s day, go with The Secret of Kells or another actually Irish movie. No American musicals with Irish themed plots, you’ll just walk away dazed and confused. Other good movies include P.S. I Love You, if you really want to cry all day, and Leap Year, for good, romantic fun. But whatever you do with your St. Patrick’s Day, I wish you a very happy one and…

May the road rise up to meet you.
May the wind always be at your back.
May the sun shine warm upon your face,
and rains fall soft upon your fields.
And until we meet again,
May God hold you in the palm of His hand.