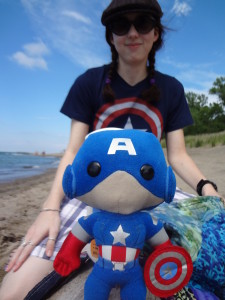 Three years ago I got a little plushy of Captain America that I found in Hot Topic. For those of you who don’t know, I am a huge fan of Captain America. Why I latched onto him, I don’t rightly know. Maybe it’s the fact that he’s from the 40s, like legit from the 40s. Not that he started in the 40s and has been around ever since, which he has, but that he is a relic of the 40s that was frozen in ice and thawed out this perfectly preserved piece of WWII era history. Maybe it’s the fact that he’s a soldier, not just a some guy who decided he could fight crime. He’ s taken on literal armies and fought along side your average Joe. Basically, I just think he’s the coolest, so when I found a plushy version of him, I had to get it.

That was right before I took a trip to the beach with my mom and a friend of mine. We ran around the beach and I took pictures of this new tiny Captain in all the places. We took pictures of him on the beach, with all the animals at the zoo, by the pool, in Walmart, everywhere. When I got back from the trip I put all the pictures on Facebook, and then decided this should be a thing. For the past three years the little Captain has been riding around in my bag, waiting for a new adventure.His latest adventure was on a tourism trip to Pittsburgh, during which time he road on the incline and took a Just Ducky Tour in a dukw boat, conveniently covered in camo. I imagine it brought back some memories as the dukw boats originated in WWII. 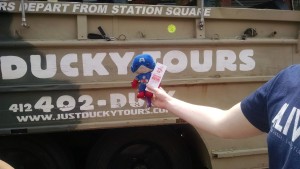 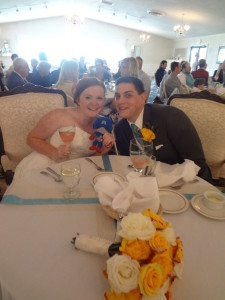 The Captain has been many places over the years. He’s been to several parks, the zoo, Maine, Erie, Geneva, Massachusetts; saw fish, tiny trees, waterfalls and plays; hung out with brides, actors and small children; and he’s saved the world in there a couple of times, you know, in his spare time. I’ve taken him everywhere and he’s gotten pretty beaten up along the way. I’ve had to sew his shield back on at least once and should probably redo the stitches soon as their feeling loose again. His tag is probably illegible by now with all the dirt that it’s accumulated. He’s on his way to raggedy, but I am very attached to him. We even gave our ring-barer a plushy Captain of his own to carry in our wedding. However, I’m not entirely sure my attachment is a good thing.

My junior year of college I had the worst week of my life. It was during the fall semester, just after Thanksgiving, and I had returned to school with a cold and managed to drop my phone in a cup of tea, graciously given to me by my pseudo roommate. So of course, in his week that all was going wrong, my tiny Captain would slip from my grasp and fall somewhere on campus. I had no idea where or when he had fallen and I retraced my steps all over to see if I could find him. I could not. My husband, then boyfriend, walked with me and tried his best to make me feel better. I tried so hard not to be upset about it. I didn’t want to be upset about losing a toy, I was 21 years old! It was stupid, but I went home and cried. And then the miraculous happened. A good friend from the theater messaged me on Facebook saying she had seen my tiny Captain waiting by the light all alone and she was worried for him. She’d left him there, not wanting to move him if I was coming back for him. Thus began my desperate attempt to contact my then boyfriend, now husband, to see if he would grab him for me. He had his phone off since he was in a group meeting, but he went looking afterward and found my plushy Captain America waiting by the stoplight at the end of campus, propped up just as if he were watching for the walking man to light up. I always meant to go back and get a picture of him waiting at that light, but I never did.

Since then I’ve done my best to keep a closer eye on my plushy Captain. He rides around usually at the bottom of my large purse where he shouldn’t fall out easily. After three years his adventures have become more scarce recently. He’s been so many places already it’s hard to find new places to take him and new things for him to do. Sometimes he’ll cook a new thing, or go to a new restaurant, but for now, he’s kind of out of adventures. Sometimes I think I should take him out of my bag and leave him at home where he’ll be safe. If he’s not really going on adventures why risk losing him again? But then I think, what if we do find a new adventure and he’s not there with me? What if I go somewhere exciting and forget to take him along? Do I really want to risk that? The answer is no. As silly as it is, I can’t bring myself to leave him behind. After all, I am incredibly adventure prone, and what sort of adventure would be complete without a plushy Captain America to save the day? 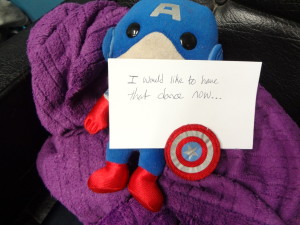