Good day, friends. I am giving up trying to predict when these things will come out. They just sort of happen eventually now, I guess. Today I am blogging from my iPad from the loveseat at my in-laws’ while I do laundry. I am typing on my iPad instead of my tiny keyboard because I forgot to bring it. It’s sort of a bummer, but I’ll just have to make due, I guess. It was going to be an awkward blogging day either way.

I had one of those pregnancy moments today. One of those “oh yeah, I’m not the same shape I once was,” moments. I’ve been getting those a lot more recently as my body is ever expanding. I was in the grocery store with my father-in-law and there was a woman stocking gum on the one side. My father-in-law moved easily passed her and I looked at the space, fought the instinct to turn sideways and waited for her to finish before following him in line. Sideways is no longer my smallest ways. It’s super weird to thin that I am actually narrower facing forward than I am turned to the side. 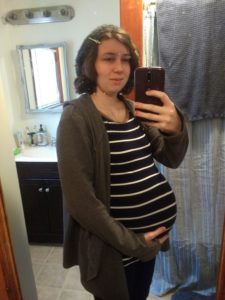 I’ve always been a tiny human. There was a joke among my friends that I could hide by turning sideways. I was always the one to slip into the tight spaces because I could do so more comfortably than anyone else. That awkward seat in the corner of the restaurant? No problem, I can make it work. The middle seat in the back of the car? Perfect for my tiny butt. You don’t have to move your chair, I can squeeze past, it’s fine. These days are long behind me now and I am slowly adjusting to my new reality. I am thicker than I am wide.

I first had this realization back in December, the first time my “turn sideways” instinct failed me. I was coming from the bathroom in a restaurant down a narrow hallway and another woman was coming towards me. My natural inclination was to turn so that I would take up less of the hall. That was when it occurred to me that it wouldn’t actually help to turn sideways. I would actually be taking up more room that way. It’s kind of startling to realize that something so ingrained in you is no longer correct. I always took for granted my ability to make myself smaller by turning sideways. I mean, who thinks about that sort of thing? You just do it out of habit. I still tried for a while to make it work, but the reality is, I am not smaller sideways and I just have to accept it.

The not being able to squeeze past things has been weird. I am so used to being able to slip behind chairs and between people and through narrow spaces that when I first started growing, it took me a while to figure out it wasn’t a thing anymore. I remember being at my parents in October and trying to move between my dads chair and the fridge, which I’ve always done easily, and getting embarrassingly stuck. And that was when we thought there was only one baby. I’ve had to find alternate placement for myself at dinner tables. If you have to squeeze a little to get into a seat, that seat is not for me. The ends are my friends now.

It’s funny how I don’t really notice how I keep getting bigger until moments like this. Clothing has also had to shift around my growing belly full of small boys. I tried to put on a shirt today that fit me a month ago. It does not fit me anymore. Not even close. I was surprised to find that even a shirt that fit me pretty well last week no longer covers quite as well as it did before. I am thankful for Christmas and maternity clothes. I am thinking I’ll have to purchase some more maternity tops, which feels ridiculous at this point. I only have six weeks and two days left. I do, technically have enough shirts that first me to last a week, plus giant sweaters, but come laundry day, I’m struggling a little. And I don’t always get a laundry day once a week. Maybe I’ll be able to find some nice clothes that are flowy but not necessarily maternity. Not that I’m opposed to wearing maternity clothes after giving birth. I’ve heard they’re still the best thing ever.

The funny thing is, for all my preparation, nothing else has changed. I haven’t had any of the swelling I was so thoroughly warned about, except a little in my feet and ankles after Christmas. But that was four days straight on my feet, so that’s to be expected I think. I haven’t gained weight in any other places, my fingers remain their usual sizes and my shoes fit as well as ever. Still, I think it was best that I bought my winter boots two and a half sizes up, and probably safest that I switched to a silicon ring instead of my usual wedding band and engagement ring. I love my engagement ring too much to risk it getting stuck and cut off. Still, I may pull it out for my showers. I miss my pretty rings.

For all my complaining, I am very thankful that things have not been as bad as they could be, especially with twins. I was told recently that 6lbs is too big for twins, but I’m still kind of hoping that we get there anyway. I realize that will equal out to 12lbs of baby, and that I’m already huge with half that weight, but I’m willing to double in size if it means having healthy boys by the end of this. Sure, the whole thing is getting less fun by the day and I totally understand the moms who want nothing more than for their babies to come early, but I’m really hoping to hold mine in as long as possible. My dimensions keep getting stranger, but that’s okay. It’s all part of the adventure. Have a lovely day, my friends.

‹ Nursery Beginnings March of the Boxes ›