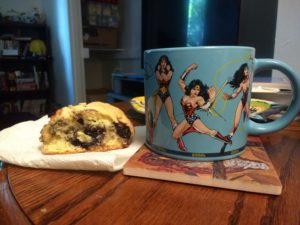 Good morning, friends! I’m sitting here in my comfy chair with a cup of coffee and a scone today. I happen to have this scone because for the past week I’ve been baking nearly every day. Why, you might ask? Well, I don’t actually know. Maybe it’s because I watched a lot of The Great British Baking Show, or maybe because I’ve been reading Anne’s adventures again and they’re always baking and sewing and the like. Whatever the reason, I’ve just really wanted to bake for a long time now and I finally started and now I can’t stop. So I’ve been doing all the baking.

It started with a simple bread recipe. I decided, since I was finally home for the day on Friday, that I would pull out the bread machine and actually clean it out and read the instructions and all that. Well, I did read the instructions a little and looked through some recipes in the book for things, but they all used flour that I didn’t have and I wasn’t sure if they could be made with just plain old all-purpose flour. So I put the bread machine away in doubt and looked up a simple bread recipe instead. 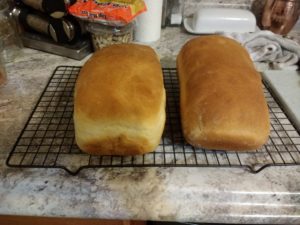 I debated on trying a different recipe with the bread machine but then I had no idea how to set it for something that didn’t tell me exactly how to do it with the bread machine and decided to just make the bread myself. And I did. It was a very simple, easy bread recipe with minimal ingredients and steps. It took half an hour to rise, then another five minutes for a second rise in the bread pans and then into the oven they went. I was so excited about my bread that I tried to make a sandwich with it as soon as it was cool enough to cut. Apparently I was supposed to soften the crust with water when it came out, which I forgot to do, but it turned out alright anyway, just a little hard to cut at first. I did a terrible job cutting the bread, but it tasted alright to me. Logan informed me when he got home that it didn’t have enough salt. That’s when I learned that a teaspoon of the kosher salt he uses by the stove is less salt than the table salt we use on the table. Good to know as I continue my baking adventures.

I didn’t bake all weekend, as we were out and about and stuff. So Monday was my first opportunity to try again. Monday’s project was shortbread made by a very well known recipe in our church. There’s a lovely older couple in the congregation who are from England and the wife makes the best shortbread. She was kind enough to give Logan her recipe for both her plain shortbread and her special, caramel chocolate shortbread. I’m hoping to make the caramel chocolate shortbread for a tea I’m going to this Saturday, but I wanted to see if I could actually make the shortbread first. 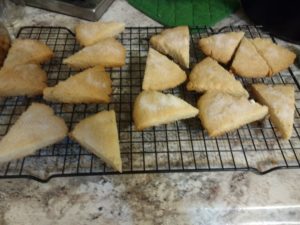 It turns out I can! It also happens to be a super easy recipe, consisting of just whipping butter and sugar together, adding the flour and a pinch of salt and then kneading it all together and forming it into rounds for baking. I think I left mine in a little too long, as they seemed a little over crunchy to me, but Logan felt they were just the right texture, and he does have more experience with this particular shortbread than me. Still, next time I might take it out a little bit sooner. My dad has my favorite shortbread recipe which he uses to make candy cane cookies at Christmas time. I would love to get that recipe too, so I can make it. It’s a softer shortbread, which I think is what threw me off.

The shortbread went over well at D&D and with my parents to whom I brought some when I went up for the day on Tuesday. No baking Tuesday as a result, but Wednesday gave me a free morning to make scones. Scones are another thing that I discovered were pretty easy to make and my mom-in-law sent me a really good scone recipe that I use regularly. We have a bunch of frozen blueberries and craisins from the last time I made scones so I figured I had better use them. 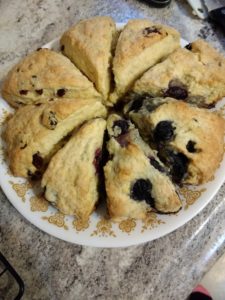 So scones were made and, as usual, they took longer to bake than I would have thought. I think the blueberries mess with the dough, since they’re frozen and full of juice and that’s a lot of extra moisture I can’t account for when mixing. I make a single batch and split it in half, as you’re supposed to, and then mix in the fruit since Logan likes the craisin ones better and I like the blueberry. I think I may have to just make one batch of each, though, to try and compensate for the blueberry juices. They always need like ten extra minutes, at least, over the craisin scones. I did lose count of the sugar when I was making this batch, but it seems to have turned out alright. I couldn’t remember if I’d missed counting a scoop in the middle so I put the last one in as half a scoop, figuring half a scoop too little or too much wouldn’t be terrible either way. And they did turn out alright, so there you go.

Today I think I’m going to try some oatmeal bread. I made a oatmeal bread with a friend of mine last year and it was the best. I don’t have her recipe, but I figure I can try one online for today and see how it goes. I will pilfer that recipe someday, though. Tomorrow is a whole day of baking since I don’t actually have to leave the house at all and Saturday is full of things. I’m going to make banana bread for a church function and the special shortbread for the IT wive’s tea in the morning. I am debating how much banana bread to make. I have enough bananas for one loaf, but I don’t suppose my husband would mind grabbing me more bananas. He was thinking of making savory scones for the church function, but he also has a game night tomorrow night, so we’ll see.

At any rate, the baking continues. We’ll see how far this goes. I have a tendency to burn really hot and fast with my hobbies and then burn out after a few projects. It’s easier when there are people to make things for, but bread is something that we’ll definitely use and and enjoy, so I think I might be able to keep with it. Logan has been enjoying the fruits of this new crazy, so I think it’s worth it. I did, sadly have to toss one of my loaves from last week, since I didn’t store it properly and it molded. But, that just leaves more room for oatmeal bread this week. If this continues properly I think I’d like to get a breadbox. Actually, I should get a breadbox anyway, our bread is terribly disorganized in the spice box, where it does not belong. That bunny trail aside, I’m off on more baking adventures. Have a lovely day, my friends!