Hi, guys! I don’t know that I’m going to get this up in the morning, since I slept in much later than normal. In my defense, it’s been a very long weekend. It was Tekko weekend! Tekko is an anime convention that happens annually in Pittsburgh and for the past three years now, my brother and I have gone. It’s a great time to people watch, go to some interesting panels, see some friends and play some table top rpgs. This is my weekend recap. 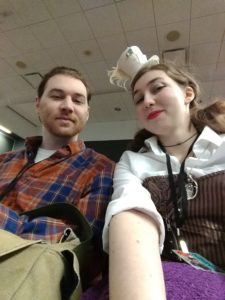 My brother came down Thursday and spent the night so we could get up early on Friday and head down when the convention opened for the day. Last year we had a long wait in line for registration since the computers had been down the day before. This year went much smoother. We were a little late heading out the door as I forgot my makeup, but we still managed to walk right up to the registration desk and get our badges without any wait at all. It was much nicer.

The first thing we did was leave the convention. We had planned to get into Pittsburgh super early and do breakfast before registration, but since we were later we got our badges first, which worked out well, actually. We went to Joe & Pie for breakfast, and they were giving a discount for being a Tekko attendee. We enjoyed a very nice breakfast and returned to the convention to check out what was going on.

We went straight for the RPG room to look over what sort of schedule they had for this year. It was pretty bare compared to other years, actually. Basically only D20 systems, 5th edition adventure league, a Star Wars game, Warhammer 40k games, and Call of Cathulu each night. We tried several times to come back for other games, but with the guy running 5th edition coming late on Friday and the times being thrown off we didn’t manage to catch any starting games that weren’t ridiculously full already until Call of Cathulu. With that half of our con-going experience out we were left to look for other ways to entertain ourselves. We went to a couple panels, one on cheap and easy cosplay tips, one on the history of Godzilla and Daikaiju in films. It was actually really interesting, at least for me. I feel like my brother humored me a lot throughout the con.

We actually spent a lot of time outside of the con, on the cold day, of course. We went back to Joe & Pie to try their pizza this time. We think we like them, but the pizza we got wasn’t as filling as it could have been. We split a sea food pizza so it kind of needed something else with it. We then went over to Colony Cafe, which is Pittsburgh’s first cat cafe. We didn’t get to see the cats, but we did enjoy some very good hot chocolate with homemade whipped cream, and chatted with some very nice people from the convention. Over all we were really pleased with the experience we had at the local shops we went to. Everyone was very nice. Eric and I are planning to do a lunch date there sometime so we can register for a slot with the cats. You have to sign up ahead of time since they’re so popular and only ten people can be up with the cats at a time, so they don’t get overwhelmed.

Our night ended with a very long game of Call of Cathulu and an adventure trying to get home. Boulevard of the Allies was closed in the evenings all weekend and it was very inconvenient. We didn’t realize it until we’d already gotten through enough traffic to see the exit was closed and then it was too late. We ended up going through the Liberty Tubes, to loop around and come back through the Fort Pitt tunnel, so we managed to go through three tunnels when we should have only had one to go through. 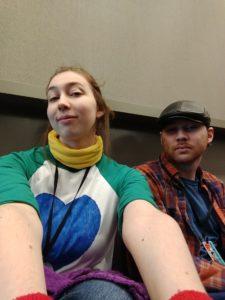 Up again and out the door later because hair this time, we managed to make to the convention center around the same time as the day before, oddly enough. We ate a bit of breakfast before we left so we could go to a panel on the Korean alphabet before heading out to explore the city a little more and get lunch before the first Adventure League game of the day. We ended up walking all the way down to a CVS five or six blocks away to get snacks and so I could buy deodorant because I’m a ditz and forgot to put some one before we left.

We then made our way back to Colony Cafe for some coffee this time, even though we still couldn’t look at the cats. We chilled there for a little bit before trying to check out the comic book store next door. It looked like a cool place, but we both had bags with us, which were forbidden from entering the comic book area. They had a little convenience foods area that we were allowed in with bags, but not farther. We decided maybe we’d come back later. We didn’t, of course, because my legs and one foot were already super sore from walking 17,000+ steps the day before. I was super not up for all that walking a second day, so Eric ran out to get lunch before we joined in the Adventure League game at 12:30 and I called Logan because I missed him.

We super enjoyed the Adventure League stuff we got to do on Saturday. We played in two games and had a lot of fun with the DM and the small group we had the first round. The second game we played at the end of the night was way over packed. We sat down when there were three others saving spots for two more and then three more came, it was very crowded. But we manged and it was still entertaining, even if it wasn’t really a challenge with that many people to beat up on one target. And now we have Adventure League characters so we might look into doing some more of that.

For Saturday I did my first real cosplay. I dressed up as Rika from Digimon Tamers. It was supposed to be a duo cosplay, but my partner had a lot of super legit conflicts and couldn’t come to the convention. I thought about waiting until we could do it together, but I figured since I had all the stuff already, except the hair, I could go ahead and we’d do it together next time. I wasn’t expecting anyone to recognize me, but to me surprise and delight, several people did and one even wanted my picture, which is a big deal for cosplayers. You know you’ve done well when someone wants a picture of you. I’ll talk more about that on Wednesday, though.

We got to hang out with two of my very dear friends from college, Barker and Lindsey. It was so nice to just sit with them on the floor of the convention hall and watch all the people and catch up a bit. They were dressed as Judy Hopps and Nick Wilde from Zootopia and it was the most adorable thing. They’re super cute, I like them. We enjoyed a panel comparing Digimon, Pokemon, and Yu-Gi-Oh, which was super fun, and then ran over to the next panel which was on RWBY and the fairy tales the characters are based on. At least one of those my brother was actually interested in, I think.

We ate chips and jerky for dinner and played the last game of Adventure League before heading home to another adventure of trying to navigated Pittsburgh when the obvious way home is closed. It went about about as well as the other adventure, only with less tunnels, so there’s that. We got home and ate some pepperoni rolls my wonderful husband had made, snuggled cats and then went to bed.

Sunday
My mom came down to church with us, which is always nice. We snuggled the church baby, who was very happy all through service and fellowship meal. I’m pretty pumped since my college roommate is moving into our old apartment complex, ten minutes from us. It was a very good day for fellowship meal as Norma brought her famous shortbread. We have the recipe for it and someday we will actually try making it. Usually I wait until after I’ve finished my lunch to go back for desert, but when Norma brings shortbread, you grab that shortbread ASAP, to ensure it isn’t all gone by the time you get back.

My legs were super killing me from walking around the convention, but it was such a nice day we couldn’t not go to the park. So we went and walked around the park with the airplane and the creek to wade in. Molly and I took our shoes off to walk around in the water while everyone else stayed dry. It was really nice to be out in the sun, though, after the cool day on Friday and all the time spent inside on Saturday.

For our entertainment that night, we chose to expose my mom to MST3K. The new season comes out on Netflix on Friday and my husband is so super excited. As a backer, he got early access to the first episode so we had to watch it on Sunday. Thus far we are very pleased with how it’s turned out. The tone is consistent with previous seasons, they still keep it super low-budget looking, while cleaning up some parts to improve the quality of the sound and commentary. We’re really excited to see what the rest of the season has in store for us.

This week is actually completely open at this point, but that can change very quickly. We still have to see if Logan will have to work on Friday or not. It’s a work holiday, but they’re releasing the beta of the new site this weekend, or maybe Monday now? It’s all very confusing; they were going to work Friday but then things changed, so they’re not sure now. If he doesn’t work we might make special release day plans for watching MST3K. We shall see. I hope you all had a lovely weekend too, and have a lovely day, my friends.

‹ Of Musicals and Moving My First Cosplay ›