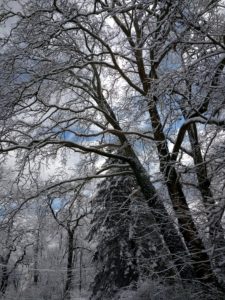 Good morning, dear friends. This morning I am sitting in my comfy chair, as always, with a cup of coffee, which is a little rarer these days, watching my cats watch the birds outside playing in the snow. That’s right, snow. If you’re on the east coast, you’re in PA you’re probably experiencing some of this too. It’s the annual March snow.

Seriously, this happens every year. You think it’s warming up, you think it won’t get back down to freezing again before spring, it’s fine, and then it falls. You wake up one morning and there it is, just all over the place. I have pictures from college of the March snow coating the trees. It’s practically tradition. Of course here we can get snow well into April, and sometimes in May. This is why my dad won’t plant until the end of May/beginning of June. So yeah, this isn’t unusual at all, just a thing that happens.

Still, I have mixed feelings about it. I’ve been wishing for snow all winter as February gave us gorgeous 70 degree days and trips to the park. I like things to be, you know, the way I expect them to be. So on the one hand, snow is pleasing to me. I feel like I didn’t get enough of it this winter to be sick of it yet. My mother-in-law is probably very happy right now, so long as it’s all cleared off the roads. On the other hand, I was just getting used to the idea that winter was over and spring was happening. I had accepted that this winter was kind of a dud and that we’d try again next winter and now we’re back to actual winter. It’ll probably all be gone by tomorrow, but still, why must it toy with my emotions?

I suppose I will accept this gift of snow. We did get like three inches overnight. It looks pretty clear, as far as the roads go, from here, so hopefully it won’t interfere with social plans for tonight. I think I’m actually going to get to wear that dress that I’ve been trying to find a thing to wear it to since I bought it. Winter dresses, man. Anyway, we’re going to a 21+ night at the Natural History Museum tonight with my siblings, so I’m pretty pumped about that. Apparently it’s Beauty and the Beast themed so they’re encouraging people to dress up and walk around with cocktails and stuff. So I’m thinking I’m going to go for it. I don’t get that many chances to be fancy.

I have had the sad realization that even if I wanted to go out and play in the snow, I don’t have any snow clothes to play in. I kind of want to, though, because it looks like good packing snow for maybe making a little snow man or something. I could make my sister go out with me and make one. I’ll have to go out and shovel anyway, so I might as well. Every year I think I’ll do it. I’ll go out and make a snowman. But I have yet to actually do it. I just don’t have gloves that won’t soak through. I do have super thick mittens, though, that will get very wet, but will probably take a while to soak through to my hands at least. Maybe I’ll go for it. This might be my last chance to make a tiny snowman this year, so I’d better take advantage while I can.

If I’m going to do it, I’d better go now so that I have time to shower before my sister comes down. I can’t do it after I show because then my hair will freeze and that’s no good. So I hope you all are enjoying what ever snow you got. Have a lovely day, my friends.

‹ Women’s Day Ramble. A Night at the Museum ›