The Thing About Valentine’s Day

When I was growing up, Valentine’s day was basically just like any other holiday that promised candy. My whole class would make boxes, you would buy several packs of cheap valentines with cartoons on them and what passed for clever sayings on them for a nine-year-old, and give one to ever kid in the class, because it was mandatory. Which, I mean, yeah, otherwise you get kids who get all the cards and kids who get none, but still, kinda takes the whole sentiment part out of the equation. I remember it being fun and you got some candy from the kids who went through the effort to tape candy to every valentine, which was nice, but it wasn’t anything super special.

As you grow, your perspective changes. Not sure when my perception of Valentine’s changed, but at some point you switch from, “oh this is an opportunity for candy” to “This is a chance for romance.” I went through a long phase where I wore black on Valentines day because I was cool for the mushy stuff and originally it was a day to remember the martyrs, so that’s what I was going to do. Special teens are special, and I was a late bloomer, so there you have it. But at some point the switch clicked and while I had boyfriends before my husband, I never had them through Valentine’s day. I tended to make poor life choices, but at least I realized my mistakes sooner rather than later. My exes were both very nice guys, I just shouldn’t have dated them.

So Valentine’s day, for a long time, was this point of curiosity. I knew how it was portrayed on TV and social media and such, but I had never experienced it myself in a relationship context. Secular culture hypes it up a ton, it’s the pinnacle of romantic opportunities. You have to do  something special for Valentine’s day. You have to be fancy and extravagant and get the best gift and take the girl to the nicest restaurant. And if you don’t have a date for Valentine’s day you are sad and lonely. This is the social norm. This is what has been taught to us for generations. This is completely untrue.

I have never been an overly romantic human. A very romantic human, yes, but never overly so. I understand moderation and reasonable expectations. To say I wasn’t excited to have an actual boyfriend for Valentine’s day the first year my husband and I were dating would be a fib. I was excited, but I will admit, I didn’t have super high expectations. I was in the play, for one thing, and Dr. Kuhns doesn’t know about Valentine’s day when there’s a show to be rehearsed. So I was going to be in the theater until late, because that’s how that works. I wasn’t even super expecting gifts, because college students and limited funds and access and stuff. I won’t say I wasn’t expecting anything, but I knew that Logan wasn’t super into the idea of Valentine’s day anyway, so I was half-heartedly expecting maybe something small, but maybe nothing and that was okay, because my guy was awesome anyway. He surprised me, though, with not only chocolate, but also with the most beautifully written love letter. Because he’s great. 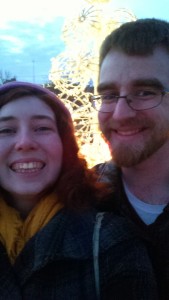 Selfies in Phipps lighted garden in the dark are kind of hard.

I’ll be honest, senior year was a blur and I was probably trapped in the theater again, because Kuhns. It wasn’t until we were married that we started actually doing things for Valentine’s day. This is the thing about Valentine’s day that I have learned from actually celebrating it. It’s not actually special in any way, except that it happens to be a built-in convenient date excuse. The first year we were married we went big. We went to Phipps Conservatory and then out to eat at a local grill in Oakland and it was really quite a lovely time. Last year we went a little more low-key, as we had just moved, and made our own lobster rolls in our new kitchen. We’re super into lobster rolls. This year we’re seeing the Lego Batman movie. Yes, that is what we’re doing for Valentine’s day. We’re huge nerds.

We have D&D on Valentine’s day. Well, technically we have a game night on Valentine’s day, since one of the couples is going to a hockey game, I think. Anyway, we were talking about if we wanted to get together with the group on Valentine’s day and the conclusion was, eh, why not? We aren’t attached to the day and the other couples aren’t particularly attached either and there in lies the thing about Valentine’s day. It’s just a day. The sentiment behind it is fine, the idea of celebrating the one you love, but much like Christmas in the RP church is just another day to celebrate Christ like we do every other day, Valentine’s day is just another day that I’m super thankful for my awesome husband. It’s not that it’s not important to appreciate the one you love, it’s just that it shouldn’t be special to this one day a year. Sure, it’s a nice reminder, but it shouldn’t be exclusively the day of love.

As a side note, you should all go play the Google Doodle. It’s super cute, actually, I like it a lot. Logan and I will be doing Valentine’s day tonight, because we apparently can’t ever celebrate it on the actual day. I’m okay with that, actually. I feel like going out and doing date things on Valentine’s day could get a little scary with all the other people rushing to be romantic. So we’re going tonight and we’ll play board games with the gang on Tuesday and then maybe buy a bunch of chocolate on Wednesday, when it’s all marked down. That’s the real meaning of Valentine’s day, marked down chocolate. I hope you all have a very enjoyable Valentine’s day, my friends, how ever you choose to celebrate.

‹ Spontaneous Adventures The Good in Crying ›