A Collection of Candles 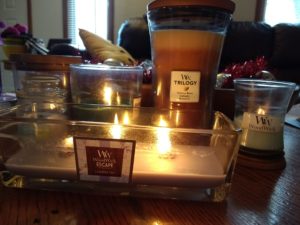 I have a new problem. I’m not sure when it started, or where it come from, or how it got so out of hand so quickly, but I have a confession to make. I think I might have a candle. problem. I’ve been enjoying candles by my comfy chair for several seasons now and I keep buying more and then Christmas came and I got a bunch for Christmas and now I just have a lot of candles hanging out around my chair. It’s not as impressive as some other candle collections, I’m sure, but It is growing at an alarming rate.

I know which candle it started with. It’s the Wood Wick that my mom got me for Christmas last year. It’s lavender spa and it smells wonderful. I didn’t burn it very much at our old place because I didn’t think of it that often and I tend to be on the frugal side when it comes to using things that get used up. I’ve never gone through a whole candle, mostly because after a while I see it getting low and I freak out a little about it being gone. Of course not using it is basically the same as it being gone, but still, at least I know there’s the potential for one more use. Anyway, when we moved to the new house I found myself burning it a lot more often. Summer came and we actually found matches, which are much more fun than a lighter, I started lighting it almost every day. I just have to keep an eye on the cats and not leave anything burning while I’m out of the room.

As you can imagine, my candle stared to dwindle and I started to think, “I should get a second candle to light for a while so I can save my favorite one.” So when we went out to Indiana I got a second Wood Wick candle that was smaller. I used it for a while too, before it started getting dangerously low. The thing about Wood Wick brand name candles, though, is that they’re rather expensive and I’m rather cheap. The wooden wick is delightful, though. It makes for very soothing background noise as it crackles. While I super enjoy them, I didn’t want to spend a lot of money on a new candle. As luck would have it, I discovered that there are wooden wicked candles from other brands, which are basically the same thing. Sure, the quality of Wood Wick is much higher than the Target brand “nature’s wick” candles, but I will take what I can get.

So I decided I should have a candle to burn for every season. Summer was the lavender and sea side smell of unknown title, which I got on vacation. For fall, I found a nature’s wick called “fallen leaves” which smells pretty much exactly like fall. For the Christmas season I got “holiday wreath” with disappointing results. It’s meant to smell piney, which I wanted because our tree is fake. And it does smell vaguely piney, but not quite as exactly as the Wood Wicks I was looking at. They were on sale, but still pretty expensive, so I passed them up, thinking I could find the same thing somewhere else. I was so wrong, and a bit sad. Next time I will know. So now I’m left with the debate on what to burn now. Do I stick with my Christmas pine scent or switch it up for the rest of winter?

I would say the switch is just an excuse to get another candle, but the truth is, I have one in mind already. My husband got me one of those tall Wood Wicks with the three different scents as you go down it. I’m really excited about it and I want to light it, but I’m unsure if I should abandon the pine so quickly. I also have a smaller candle from my sister, but I think I’ll save it for spring as it’s another lavender scent. I also have several candles that are just regular wick candles which I sometimes consider burning, but they’re just not the same, so what’s the point?

Did you know you’re supposed to trip the wicks on candles? I had no idea until Christmas when my sister and I were shopping and she mentioned it. It says it right on the lid of my Wood Wicks, actually, and on the bottom with the instructions. Apparently it’s supposed to help the candle last longer. I’m not sure how, but that’s the idea. We’ll see if I can notice a difference trimming the wicks. Then again, I could just let my cats do it for me. Calamity is into charred things, apparently. She enjoys stealing my spent matches and chewing on them. She also used to try and chew on the wicks of my candles. I have weird cats.

I’m not sure how long the candle thing will last. Thus far it has been at least six months that I’ve been super into them. I suspect after a while I will grow bored of candles and they’ll all end up in a closet somewhere until the power goes out and we need them. But you never can tell with such things. I would like to get some stick candles and a candelabra or candle sticks or something so that we could do fancy dinners by candle light sometime. That would be super cool, I think, and I feel like every house hold needs that sort of thing. Until then, I suppose I shall settle for my current collection of candles. Have a lovely day, my friends.