We got our first Christmas card the other day. I haven’t put it up yet because I haven’t decided where it should go. I’m thinking maybe over the fireplace. I also need to dig out my sticky tack ball that Twirls imparted to me after graduation. And by imparted I mean she left it behind and didn’t want it back. Same thing, really. Anyway, getting Christmas cards was always really exciting when I was growing up. Everyone likes to get mail that’s not bills. I find that getting Christmas cards now is more exciting than it used to be since they’re actually for us instead of my “family” which meant my parents. Now we get cards from family and friends who actually know us.

I’m a little concerned that we won’t get many cards this year since we moved. Sure, we moved at the beginning of the year so people have had plenty of time to get our new address, but you don’t always think about such things until you sit down to send something and realize that the address you have is not the one you need. This year we’re also sending out Christmas cards for the first time and I’m realizing that not all of the addresses I have from the wedding are still valid.

I’m pretty excited about the whole sending out cards thing, though. I ordered them from Walgreens because they were cheaper than Shutterfly and I didn’t have to pay shipping. This was important because I needed a lot of cards. I would have paid twice as much for the same amount at Shutterfly as I did at Walgreens and while I really like Shutterfly, it just wasn’t worth it to send out half as many cards. So I did the photo card thing at Walgreens and I’m pretty happy with them. I put a picture of the cats on there, because really, who doesn’t want to see how cute our cats are? Someday I’d like to get a real Christmas photo shoot taken so we have nice Christmasy pictures to put on our Christmas cards. Maybe next year. For now we went with one from our corn maze adventure that was pretty cute.

Have you ever seen Garfield’s Christmas special? It’s my most favorite of all the Christmas specials, but I won’t go into that now. The basic premise is John goes back home for Christmas and takes Garfield and Odie with him. On the drive over he sings a song about how he can’t wait for Christmas and all the things they did as kids and Garfield, being a grump, inserts snide comments along the way. The line that’s been stuck in my head the past day has been “Wrapping up boxes and writing out cards!” “Office work, out of sight.” This is how I’m feeling as I address all the envelopes and stuff them with cards and write out our return address on the corner. It’s a little tedious and a little challenging with cats, but I think it’ll be worth it. 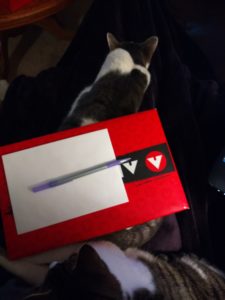 I really wanted to be productive yesterday, but I also was covered in cats. Everyone knows you can’t disturb a cat once she’s comfy. Luckily, I happened to have the Christmas cards in easy reach, so addressing cards it was, awkwardly, on a shoe box lid as a writing surface, while Calamity occasionally tried to eat my pen. I’m going to blame this for my little mistakes. Thankfully I haven’t messed up any envelopes to the point of discarding, but I have had a few slip ups. One card is addressed upside-down, which I guess isn’t a huge deal, but I can’t look at it now because it bothers me. I also put a ‘d’ where a ‘t’ should be and tried to cover it up by just crossing the ‘d’ and making the round part a swirly. But then I had to put swirlies on other letters too, to make it look intentional. Then I thought about putting swirlies on other peoples cards to make it look more normal, but realized that no one is going to compare envelopes. Most of them will probably just toss it.

I’m about half way done with the cards and I need more stamps. I also need more addresses. There is, of course, part of me that thinks I should just hand out some of them and then I don’t have to worry about postage, but the other part of me thinks “mail makes everyone happy. I should send them all so that all my friends can get it in the mail and be happy.” Of course, by all my friends, I mean like half of my friends. I wrote up a list of people to send things to and then realized that there were more people than cards. That’s the thing with ordering cards, they come in packs of like 20 so if you only need a few more than 20 or 40 or 60 you have to get a lot more than that to cover it. We went with 40 to at least cover aunts and uncles and then some friends, which means the friends list is shorter than I’d like. If I were sending them to all my cousins we’d need at least another pack. I have like twenty first cousins alone, most of whom are grown.

So I have family down, at least. I can get those mailed today, probably, and then grab more stamps so I can do the rest of them… eventually. Maybe Friday. I’ve got a lunch date tomorrow and a coffee date Friday, but I think I can find some time in there to squeeze in a few cards around cat cuddles. I hope your own card writing experiences are less eventful than mine, dear friends!