I feel like swimming is a thing that we did constantly as kids. All summer the bathing suits were hanging perpetually on the clothes line instead of in drawers because there was hardly a moment when they were clean and put away before they were pulled out again for another pool adventure. Maybe it helped that our closest cousins had a pool and we spent probably at least 30% of our time there and in that pool. As an adult I have found that swimming is not nearly as common an occurrence as it used to be. 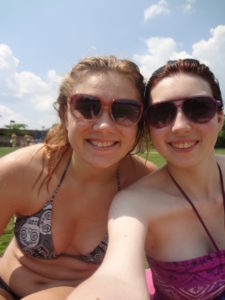 I think I’ve only gone swimming probably ten times in the past two years. Which isn’t so bad, I guess, as far as numbers go, but that’s counting from 2014 to now, so technically that’s two and a half years. So I’m averaging like four swim trips a year, if you include trips to Idlewild with the little cousins, which I do, because we do swim, so there. My husband and I have only been swimming together a handful of times and that count didn’t even start until after we were engaged. I think the grand total might be four.

This year, though, we just might beat the average. I’ve gone swimming twice in the past two weeks and we’ll be swimming again next weekend so maybe we’ll get in five swims this year instead of four. We went to the beach with my in-laws last Thursday and would have joined them in the pool on Sunday, but as I was on the tail end of my period, it was not worth the hassle of getting in the water. So there’s one count for the summer, the second was yesterday for me with my little cousins. Mom, Dad and I took the kids to East Palestine pool for the afternoon to swim. I went on the waterside several times with the girls, and did underwater flips in a bathing suit held up by a safety pin. Somewhere I have a bathing suit that’s not supported by only a string and actually fits me, I just don’t know where that is.

That’s the thing about swimming, you have to have the right thing to wear. I definitely should have grabbed the black one piece with polka dots, but I wanted something with shorts since I didn’t get a chance to shave again before the trip. So the old halter top with the blue shorts was the one I went with, with the swim shorts over them anyway, for extra coverage. I think, actually, I could have gone with the blue and black set, as it has proper straps and everything, but it is also super old and I knew I’d have kids hanging on me the whole time and the thought of that ripping in the pool was enough to keep it in the drawer. I keep thinking maybe someday I’ll get a two piece that I really like that actually stays up properly. I’m starting to question if that’ll every happen, but I can always hope.

The other thing about swimming is the sun. The sun is a thing that I don’t really get along with super well. I’m the whitest of the white people and my Irish heritage just won’t let me tan. I am also covered in moles of all varieties and that’s a little concerning, so I’m basically supposed to avoid the sun at all costs. Swimming doesn’t leave that as much of an option, so I just load up on sunscreen as much as possible. That doesn’t always work as well as I would hope. I got sunburn on my shoulders, despite reapplying sunscreen after an hour like you’re supposed to. I guess next time I’ll just wear even more sunscreen and see if that helps. I don’t think it’s too bad. It looked pretty red last night, but I slept alright and it doesn’t look so bad this morning. I have an aloe plant ready and waiting, though if I need to put something on it. I’ll admit, I’m a little excited to use my aloe plant. I mean I’ll feel bad about breaking off one of his leafs, I always thought it was super cool to use the gel inside on burns when I was little. So I’d be cool with having an excuse to use the aloe plant, even if it’s a bit painful.

We have a family picnic next week back at East Palestine and swimming will probably be involved. That’ll take my total up to three. If we go to Idlewild with the kids that’ll be four and if I manage to drag my sister to the wave pool when she gets back from vacation that’ll be five swimming excursions this year. We’ll be going on vacation to DC in August and there’s probably some potential for swimming while we’re there. The beach is a little far from where we’re staying, but a pool trip might be in order, who knows? Maybe if it’s nice on Tuesday I’ll make my husband come to the wave pool with me for our anniversary. Anything is possible. I’m hoping for some more swimming adventures this year. I forgot how much fun it can be. Have a lovely day, my friends.

‹ A Day All Our Own Anniversary Pokemon ›