Okay, full disclosure, this title is a little misleading. I did try a flower garden when I was a kid, but it was quickly devoured by chickens, so I’m not sure that one counts. I also grew morning glories in my dad’s garden, but they really just do their own thing, so you know. Anyway, outside my house now there is a garden and it is all mine and it will not be eaten by chickens, though rabbits might be a different story.

My parents came down on Wednesday so we could go to Olive Garden for my mom’s birthday. We had a really lovely lunch and then went to Home Depot for garden supplies. I had a ton of pepper plants and some petunias to plant from a girl at church who was selling them for something or other. So all we needed was a spot, some soil and a way to contain it. My dad got two boards for the frame and four bags of soil. We also got two tomato plants and a jalapeno plant for my husband. I have named this one Jeff. Jeff the jalapeno plant. 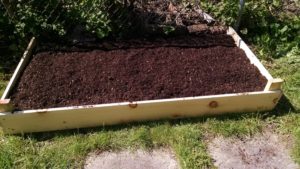 There was concern that we wouldn’t have enough soil for the box. We could only carry back so much in the car, but it turned out all right in the end. My dad cut one board in half for the sides and cut another pieces of wood into two stakes to pound into the ground for supports. The newly bought boards were screwed to these stakes, once placed and our frame was completed. We laid newspaper down to keep the grass from growing through, because there was some mild concern about that and I had seen on the internet that newspaper works well and decomposes in about 8 months so you don’t have to worry about it later. This was my one useful contribution all day. I also cut open the soil bags, so I guess that kind of counts. Other wise my dad did all the work while I watched intently. He poured and spread the soil out and then we were ready to plant.

We planted six of the like twelve pepper plants. My dad was going to take them home, but forgot. I would have taken them up with me but I didn’t realize they were still there until it was too late. So if anyone wants some bell pepper plants this weekend I have them. I’m not sure how long plants last in their little packets. The tomatoes went along the back by the fence so they can be tied up if need be and Jeff went in the lower right hand corner, away from the bell pepper plants in a vain hope that they won’t cross pollinate too much. We’ll see. My dad didn’t seem too worried about it, but then again, he’s also still convinced I won’t eat peppers in things, so you know. We’ll see. Maybe it’s a chance to increase my heat tolerance. That would make my husband happy. The petunias were looking a little sad, but we watered them and planted them along the front of the box and they seem to be doing better now. 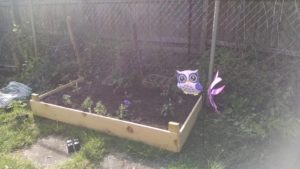 The finishing touch was a pinwheel my dad got me from Roger’s last time they went out. I’ve been saving it to put by the garden and I finally got to bring it out. It tipped over yesterday, but I think I’ve got it in there good enough that it’ll stay upright in the wind. Now all I need is a watering can and I’ll be good to go! I’ve been using bowls and pots for watering purposes thus far. It works well enough, I guess, but it’d be nice to have an actual watering can. We’re going to try basil and garlic soon as well in a little spot by the patio. My dad says usually you plant garlic in the fall and let it grow in the spring, but we’ll try it this way and see how it goes. I’d also like to plant some cilantro because we use so much of it for guacamole, or we rather, we buy so much of it and it goes bad in the fridge or gets left out accidentally and gets gross. It’d be cool to just have our own all the time whenever we need it. At any rate, we now have a garden of our very own, and I am super excited to take care of it and watch it grow and hopefully get some veggies this year. I imagine having fresh tomatoes at our finger tips will make my husband very happy. Have a lovely day, my friends.

‹ Adventures in Scheduling Adulting in the Worst Way ›