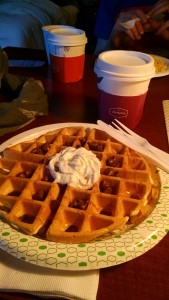 Good morning my friends! I am writing to you from Warsaw Indiana this morning while eating a waffle in my hotel room with my husband. We’re talking about comic book adaptations. We’re here to see my sister-in-law’s senior art show tonight, which is pretty exciting. It’s the first time I’ve been able to come out and see her at college. This is also the farthest west I’ve ever been. We didn’t travel a whole lot growing up.

So we had an adventure yesterday morning, first off. We got up, got dressed, went out to get some stuff to wash our cat and realized instantly that we had locked all the keys in the house. Luckily we found a window that wasn’t locked, and we gave a spare key to my very good friend Lindsey who was willing to come and feed our cats, and let us in if need be. She’s seriously my favorite super hero right now. Not only is she feeding our cats, she’s giving poor Calamity all the medicine, which is no easy task. Luckily it’s just Calamity. Pearl is the really hard one. Though apparently she let Lindsey’s fiance pick her up, which is super impressive. She doesn’t even like us to pick her up.

Anyway, after we locked ourselves out and broke in again we managed to give poor sweet Calamity a bath so she was not quite so poopy. That lasted like half an hour, but hey, it’s something. She was super not happy about it, but really, who is happy about baths? I laid out plastic table cloths in the spare room as protection, which may or may not have worked. Pearl was really into playing with them. All the cat stuff was moved in and that’s where they’ll stay until we get home. It was necessary for the sake of our furniture. 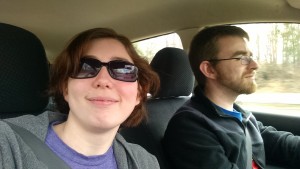 So with our cat all washed and situated we headed out on our 8 hour journey to the land of Indiana! I have to say, this trip was not as bad as some of my other trips. I think because there wasn’t any New England traffic to deal with. New England traffic is the worst. But it was just flat Ohio land with the weird wispy clouds that come down really far and are super disconcerting. I guess if you’re sued to that sort of thing it’s not, but I’ve never seen clouds like that. It was super strange. We made a couple of pit stops, but the drive went super smoothly and we listened to a Star Wars pod cast the whole way, which was really good. I didn’t get any reading done, due to podcast, but I’m okay with that.

We arrived at Lauren’s college around 7 and went out to a Mexican restaurant for dinner before a tour of the campus. They have the coolest chairs in the library. We were practically the only ones in there by the time we were looking around and we basically just went over to the writing lab corner where Lauren works and discovered these stool-type seats that spin and wobble and you can adjust the height. We may have played on them for like an hour. Logan even looked them up to see how expensive they were. Pretty expensive, but you know. Maybe we’ll save up and get one.

Today we’re going on a tour of the town and area around the college. I’m super pumped. There’s a book store somewhere that I’ve been promise, but that might not be until tomorrow. We’ll see. I hope you all have a lovely day, my friends, wherever you are today.