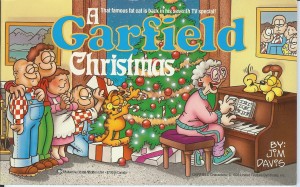 It took me a while, but I’ve finally gotten into the Christmas swing, complete with tree, Christmas music to accompany me as I drive and, of course, Christmas specials. There is something, well, special, about Christmas specials. They have a very special place in my heart and always will, I imagine. They’re lasting and classic and fun and usually light hearted and bring out that little kid in me every year.

Growing up we had several VHS tapes full of Christmas specials recorded over the years. They were kind of a fun mix of your classic specials, “How the Grinch Stole Christmas,” “Frosty the Snowman,” and the like, and some more unique specials such as “A Garfield’ Christmas” and “The Story of Santa Claus.” I remember seeing commercials for new specials and setting up the VCR to capture them for our future enjoyment. Sure we watched some of the specials when they were actually on TV, but mostly we just watched the tapes over and over again.

We watched a couple classics last night with my in-laws that they got on Blu-ray. My husband had never seen “Rudolph the Red-Nosed Reindeer” before, so it was a new experience for him. Keeping in mind that he’s not a super Christmasy person to begin with, he was less than impressed, but it was still fun. They changed the movie, though, for the 50th anniversary edition. They took out the song “Fame and Fortune” and replaced it with “We’re a Couple of Misfits” which I guess was in there originally. It was one of several moments during the movie when I squinted a little thinking “this isn’t quite what I remember.” We watched through 50 random facts about “Rudolph” and learned why. I grew up with “Fame and Fortune” and I think I like it better. There’s just something wrong about seeing Herbie the elf punching out a snowman shaped like his boss.

My absolute favorite Christmas special, though, is “A Garfield Christmas.” We were pretty into Garfield growing up, at least in theory. We liked the comics, even if we didn’t get to watch the cartoons that much, and we liked the idea of a cartoon cat, I think, more than the actual character himself. But we would read him every Sunday and my brother had a book of his strips from some Scholastic school event. None of that is why I love the special so much, though. I love it for it’s simplicity. “A Garfield Christmas” is probably the only special we would regularly watch that doesn’t require anyone to be saved or to save Christmas. There’s not urgency, no problems to be solved, no conflict even. Just Garfield, John and Odie going to the farm for Christmas with John’s family and all the stuff they do. They eat dinner and decorate the tree and sing Christmas songs and remember loved ones who have passed and it’s beautiful. Garfield learns that Christmas isn’t all about getting, that it’s about being with the ones you love, but it’s almost accidental. It’s not being pushed on him, it’s only briefly stated, it’s a lesson you see growing up to the end when they enjoy Christmas morning together. If you can find it, you should all go watch it, because it really is the best Christmas special ever.

The worst, on the other hand, is “Frost Returns.” Some of you have heard this rant and feel free the skip over this part if you like, but for those of you who haven’t heard of this one or might be curious to see it, I feel the need to warn you, it’s bad. The entire premise is that rich business man has invented a spray that gets rid of snow. But Frosty, brought to life by a little girl’s magician’s hat, is made of snow, so that makes him the villain. Also, said business man wants to be king of the town. How that works? No idea. They don’t really logic, I guess, because everyone is super excited about this except the little girl and her friend who want to save Frosty. The thing is, the adults are excited because, you know, it’s safer not to have snow on the roads and sidewalks and all that. The kids on the other hand, are excited because they think not having snow means that it’ll be warm all the time and they can have beach parties in January and picnics and not have to go to school? As if getting rid of snow suddenly makes it warm. So they run around being ridiculous and singing about how snow is great and they go to this winter carnival to prove that snow is the best and they should get rid of their snow removal spray and enjoy the snow. Have you figured out what’s missing from this “Christmas” special?  Yeah, Christmas. There’s no mention of Santa or Christmas or anything. There’s a sleigh at one point, but that’s as Christmasy as it gets. Seriously, the worst. It makes no sense, it’s not well animated, there are no lessons learned, it’s full of stupid people running around being dumb and I hate it. End rant; we can move on now.

If you skipped that last part, welcome back! I have a confession to make. I really like the ABC Family Christmas movies they show every year. I know, I know, they’re campy and low-budget and made to cash in on the Christmas season with minimal effort, but I kind of love them. I’m a sucker for cheap romance and happy endings. One, or rather, two that stick out to me are Snow and Snow 2: Brain Freeze. Staring Tom Cavanagh, whom I also kind of love, they’re goofy little stories about Nick Snowden who has recently taken over as Santa, which is a family business thing, I guess. Desperate to do a good job, he find himself missing a reindeer and has to get a room in a boarding house while he tries desperately to free said reindeer from the zoo, and keep his identity a secret. Mixed in his a little competition with a wild game hunter who is chasing after one of the zoo keepers, Sandy, who is in need of a little Christmas cheer. You can see where this is going, right? Nick and Sandy fall in love, they rescue the reindeer, he tells her who he is, leaves, and comes back just in time for her to change her mind about going with her. The second movie is kind of fun as well as they prepare for their first Christmas together. Since this is Nick’s busiest time of year, they end up fighting and Nick goes off and ends up with amnesia. Sandy has to go and find Nick and figure out a way to restore his memory in time for Christmas. I know, they sound kind of dumb, but they’re so much fun to watch. It’s kind of a guilty pleasure, I guess.

Christmas specials have always been a huge part of Christmas for me, and I’m sure for many of you as well. I love popping in the tapes at my parents’ place, even if it’s slowly deteriorating, and watching all of my old favorites, 90s commercials and all. They always make me smile, sometimes they make me tear up, even, and they never fail to put me in the Christmas spirit. I can’t wait to enjoy more Christmas specials with my family this year, and I hope that you will enjoy many of them as well.