Who could honestly look back at their childhood and say that the most exciting thing about Christmas was not waiting to open presents? What child hasn’t snooped around their house at least once a year to see if they couldn’t locate the hiding place of said presents? After, of course, the Santa bubble has been burst, I guess.

We never really believed in Santa. It wasn’t something my parents taught us. Sure, we picked up a little about him from our classmates, but the fact that my parents were very open about the fact that Santa was a fictional being made it easy to play along without investing. Santa was a game of pretend, like the tooth fairy or the Easter bunny, that we played around Christmas, nothing more. So we knew, at some point, that somewhere there were gifts hiding and if we looked hard enough we could find them. Sometimes we did, sometimes we didn’t. Sometimes it’s just more fun to not find what you’re looking for and preserve the surprise on Christmas morning.

Christmas gifts were so much easier when we were kids. We would go shopping for one parent with the other and think of all the things to get them without worrying about budget of if they would use/like this or that. Of course they would like it! It has penguins on it and mom loves penguins, and dad loves T-shirts, and kitchen gadgets and socks. For ourselves we shopped at the Santa’s workshop at school, which made everything really easy, though also threw in the danger of repeat gifts. I remember getting my grandmother the same necklace two years in a row because I thought she would like it the second year without remembering that it was the same as the first. Still, it was neat to get things for my family all on my own, like a real grown-up.

Now that I’m older there are three parts to gift giving: the shopping, the wrapping, and the giving. Until this year I’m not convinced I ever did the shopping bit on my own. I went out yesterday to finish up a few gifts for my side of the family and my husband. I really had no choice but to go by myself because the people I normally shop with were the people I was buying things for. So I went out after a coffee date and ran around the mall all by myself and it really isn’t as much fun when you’re on your own. But I was productive and I found almost all of what I was looking for, except part of my husband’s gift, which brings me back to Amazon.

Shopping is very different now that Amazon is a big thing. I never really used Amazon for shopping purposes when I was at my parents’ place. I like to be able to wonder a store and pick things up and think about who might like it before I buy things. I mean I could come up with a list of things that I wanted to get someone, but I wouldn’t really be sure until I saw it in person. Logan is very different in his shopping style. He doesn’t like shopping, for one thing, so Amazon is a God-send for him. For his family we think “Oh, we should get mom an electric kettle” and then we go on Amazon and find an electric kettle we like with good reviews and then we buy it.

For my family I tend to do more of the traditional shopping, going out and browsing around the mall until I find something that strikes me as mom, or Erin. Boys are harder. Dad doesn’t like gifts in general and he is more inclined to buy himself whatever he wants when he wants it. Eric is into high tech things that cost a lot of need to be very specific. I find shopping for him is easier now that I have a husband who more understands his electronic hobbies. As ever, though, we find that the easiest thing is to just get him a gift card so he can get exactly what he wants. This year, for Dad, (which is safe to say since he doesn’t computer and won’t read this) I’m doing the “home made” thing and making him a super warm blanket. I’m hoping I’ll have enough yarn, though. I keep using more than I expected. I started with four balls and now I’m up to six and I’m hoping six is enough because I don’t want to go back for more again. Luckily the yarn is still on sale. I’m making pretty quick work, of it, with giant yarn and a giant crochet hook, but I somehow doubt it’ll be as big as I had thought. I may have made it too wide. Ah well. It’ll be super warm, and maybe at least square. 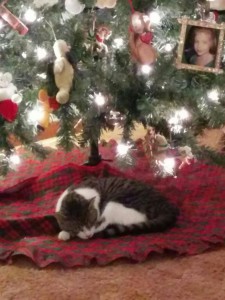 A cat will do just as well, though.

Last year we had most of our Christmas shopping done right after Thanksgiving, maybe even before. We were super on the ball. This year, we’ve taken a little longer, but we’re already down to one person, so I’d say we’re doing pretty well. And now that we have most of our gifts for the year, with a few exceptions in transit, we can move on to wrapping. Or rather, I can move on to wrapping, mostly because I actually kind of like wrapping. Weird, I know, but it’s kind of like a little puzzle made of paper that looks pretty when you’re done. I may or may not have bought ribbon for this year as well. Okay, and bridal showers. Because, really, what is a bridal shower gift without ribbon? Anyway, I might start wrapping today, just so I can throw some presents under the tree. I love having presents sitting under the tree, it makes it all the more festive.

This brings us, of course, to the giving part, which is most exciting. At my parents house we do the kids first, in a rotation, and then the parents open their gifts all at once. We sit on the couches mostly with a pile of presents in front of us and slowly cover everything in tissue and wrapping paper bits. It’s a good time. At my in-laws we sit around the tree on the floor in a pile of presents each labeled and dig around until we find presents that go to each person. We take turns in order from oldest to youngest, or youngest to oldest, I’m not sure which. We end up sitting in a pile of wrapping paper and presents and it is also a good time. It’s so much fun to see what everyone got and to see them open that present that you thought so hard about buying. It’s definitely the best part about gift giving.

I think Logan and I will do Christmas Eve day again this year for our personal gift giving. With my big family and his big church family we tend to have a lot of engagements to keep during those two days so finding our own time is a little tricky. Still, it worked out well last year to do our presents before heading out for Christmas Eve shenanigans, so that may be our tradition until we have kids and want to do our very own Christmas morning. I have finally ordered all of Logan’s gifts and even have two already here to wrap and I’m super excited. I had better get wrapping.