First, I want to address the late hour of this posting. I’m still fighting off this cold, working the antibiotic; even though it makes me feel worse than the cold, I guess it must be doing something. I’ve finally been able to get back to sleep, even without taking Benadryl to help me out. My only issue now is fighting off the cough that’s set in. I know it’s important to get all the crap out of my lungs, but maybe I could do more of it during the day and less when my poor husband is trying to get some sleep? Anyway, I figure I can probably justify not getting up early to blog in favor of a few extra hours of sleep, considering the circumstances. Next week, hopefully, I’ll be back up to speed and getting posts out before noon.

Secondly: let’s talk about Christmas. I have so many friends who get so super excited about Christmas as a general concept. I know several people who would gladly listen to Christmas music all year ’round if they could. November 1st is the kick off for a lot of my friends for Christmas and Christmas music and this is very definitely wrong. My whole life Christmas started directly after Thanksgiving: and I do mean directly. Every year we would pile into the station wagon after Thanksgiving dinner at my aunt’s house and drive home listening the first Christmas music of the season. That was the official Christmas kick off, and that’s how it should be. At least in my mind. 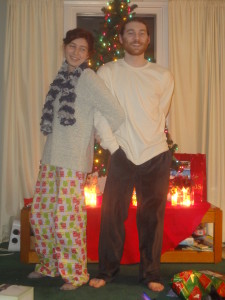 Christmas pajamas are a thing!

And that pretty much sums up the importance of Christmas for me. The biggest part of Christmas is the memories; making new ones and remembering old ones. Christmas is all about traditions: making cookies with Dad, going to Pittsburgh with the in-laws, finding the tree, decorating in our pajamas, opening Christmas jammies on Christmas Eve. This is what Christmas is to me.

So since all of my favorite parts of Christmas involve memories I decided last year to just do a December series on Christmas memories. I will probably revisit ones from last year, but that’s okay, because most of you probably didn’t see them. Well, some of you probably didn’t see them. And anyway, I covered a lot of ground last year, leaving not much for this year. So we’ll start with the new material and go from there. Probably. Plans are meant to be broke.

I’ll let you know right now that I won’t be posting on Christmas, even though it’s a blogging day. I probably won’t be home at all over those two very special days and absolutely will not have time for blogging. So the 23rd will be my last blogging day until the 28th when I’ll probably come back and talk about New Years or something. Until then, I hope you’ll enjoy our coming Christmas adventures together! Have a lovely, Christamsy day, my friends.

‹ The Adventures of a Sickly Purps Christmas Memories: Carols ›