And Now You’re Even Older

I was reminded several times on Saturday, by my poor sick husband, that I am now old. Or, at least, older than I was. I turned 24. This means that I’ve caught up to my husband, at least for the next five months or so. Looking back at my memories on Saturday and the days leading up to it and following it I was reminded that nearly every year I write a blog post about my birthday and birthdays in general and how they make me feel. The thing is, though, that birthdays have diminished. They’ve shrunken in my mind to a more reasonable expectation level. Which is good, I guess. I mean, looking forward to a day of nothing terribly special is always kind of depressing. I had a long run of really bad birthdays before I met my husband and it left me rather cynical towards the whole thing. And then I met my husband, and suddenly birthdays got better. Weird, huh?

I’m slowly coming to terms with the fact that there may or may not be birthday soup this year. I’m sure you’ve all heard of birthday soup by now. I only talk about it all the time. I’m sure you’re all quite sick of hearing about it. But it might not happen this year. Which would be sad as we have a whole chicken and everything waiting to be made into it. But due to a lack of convenient days and no one being willing to commit to a day it might just slip by without actually happening. I’d have liked it to happen before the end of the month, however, if we can manage to get it in after the next 5k that would be acceptable as well. It doesn’t even have to be a big thing. I’d be happy with just having soup. When my cousin made wedding soup over labor day weekend my mom said “Well, I guess we don’t have to do birthday soup now. You’ve had your soup.” This is complete nonsense, of course. It’s not birthday soup if it’s not made by dad, even if it is roughly the same recipe.

My soup addiction aside, I’m coming to terms with the fact that growing up and getting married means celebrating differently. Things that I almost took for granted are not part of our usual celebration anymore. My husband was also sick this year, so I feel like he should get a free pass on forgetting birthday surprises. He was going to bring me cookies from our favorite bakery, but forgot. Having a cold with do that to you.

When I was growing up, though, my mom would get me a pink rose every year. The story behind it is one of my favorites, and probably highly romanticized. Before I was born, my mom really wanted a baby girl, but was afraid of being disappointed, so they refused to find out my gender, knowing once I was here, it wouldn’t matter if I were a boy or a girl. Still, she was afraid, so an older woman at her Bible study prayed for her and gave her two roses from her garden, one fully bloomed for my brother and a little rose bud for me. They day they brought me home from the hospital the rose bud had bloomed into a beautiful rose. That’s why every year my mom would get me a pink rose for my birthday. I think it’s a terribly sweet tradition, however, now that I’ve moved out I don’t get roses anymore. I’m sure if I asked my husband to get me roses he would, but it isn’t quite the same. Perhaps I’ll ask anyway. I do so love the roses.

So I know I promised to tell you guys all about our rock climbing adventures, but they, unfortunately, had to be put off. As I said, my husband was sick this weekend and is slowly getting over a cold, which I’m hoping I can avoid catching myself. So I spent my birthday reading, mostly, while my husband slept as much as he could. I still had to get up early so I could talk to the maintenance guy about our leaky hose under the sink. It’s a dishwasher thing, so we can still use the sink at least, until he comes hopefully today to replace the hose. We’ll see how that goes. Anyway, once my husband was awake and showered we drove out to Cheeburger Cheeburger, the best 50s themed burger place in the whole world, I’m convinced. It was a usual post-movie hangout when I was in high school and early college. The one we went to closed when I was a senior in college, but a new one opened about 40 minutes from us, so we go there on special occasions. They have the best onion rings ever. We also went to a comic book store to spend the rest of our comic book budget for the month. I got two trade paper backs that I’m pretty excited about. The rest of the night was spent watching MST3K’s Pod People. We’ve been watching a lot of MST3K since my husband found all 10 seasons. Mostly because I tend to get stuck on one thing for a while and want to watch that all the time. This is why we don’t watch Parks and Rec anymore. 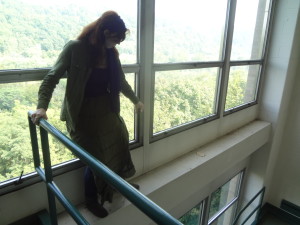 So that was my 24th birthday. Not super exciting, but compared to some of my pre-husband birthdays it was pretty good. I don’t know that anything will beat the pirate themed treasure hunt my roommates set up for me my senior year of college. That was a pretty awesome birthday surprise, and it came with an eye-patch and a parrot coat for Captain America. I think I still have that somewhere. Putting a clue out on a high window sill was a bit sketchy, though. You think, “oh that’s totally wide enough to walk on safely, no big deal!” and then you step out there and it’s like “oh crap, this was a bad idea.” But you know, what is college for if not doing stupid things? Anyway, it’s been a pretty good time. I got a Kindle and a really cool book from my brother, and a very warm purple poncho, which is fun to say, and a very soft long-sleeve wrap and a blender, which probably doesn’t sound super exciting to you, but Twirly will understand, I’m sure. You know you’re getting old when you get a blender for your birthday and it’s the coolest thing ever. In the worlds of They Might Be Giants; “You’re older than you’ve been and now you’re even older and now you’re even older still.”

Have a lovely day, my friends.