Switching It Up While Sore

Good Morning, dear friends. It’s a sunny Tuesday morning and I realize that I am, technically, a day late. I thought about writing yesterday, I really did, but having woken up with my husband still in bed and breakfasting and showering and dragging ourselves out to do some shopping, the day went by and I never did. I feel justified in my skip, though, as it was Labor Day and as I spent the weekend splitting and stacking wood. So this week I’m going back to the old schedule and then next week I’ll come back to the new schedule, hopefully and we’ll pretend this week never happened. Deal? Good.

The other reason I didn’t write yesterday is because I am sore all over. I did many things this weekend that I never do and it’s taken its toll on my poor arms and legs and back. And hands. Who knew chopping wood could be so rough on your hands? Well, okay, I did see that one coming a little bit. Blisters are a thing, but I mean the muscles. My hands ache when I squeeze them even just a little, even just as much as I apparently do when I was them, which I didn’t know I did until this weekend. How crazy is that?

So to start our weekend we drove through a thunderstorm, completely with flashing lightning and pouring rain, to get to the family cabin where it was mostly dry. I drove half way and then my husband took over because I have this great dislike for thunder and lightning and I could close my eyes while he drove. We made it safely, had a few beers and then went to bed. I woke up to my sister impatiently texting me to get up so we could run. Here is the problem with letting your husband lead the running: he’ll inevitably pick the most difficult way because he doesn’t know what’s on the other side of the hill and you don’t stop him because you don’t exactly remember what’s on the other side of the hill either. So we ended up running down hill for almost a mile and then, naturally, having to go back up the hill. The good news is I got two miles in with my sister. The bad news is, my legs hated me for the rest of the day and the next day and the day after that. Maybe tomorrow I can try running again. Maybe. But it’s good endurance training and the 5k we’re doing in October is mostly flat, or so I hear, and apparently once we get there after all the tough hills and stuff, a flat run will seem so easy. I’m looking forward to that at least. 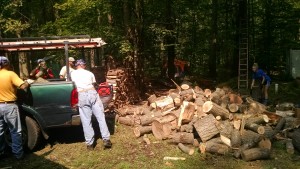 Once we got back from the run and consumed a breakfast of sausage gravy and biscuits it was on to the chopping and the stacking. We shifted the old wood forward so we could stack the new wood behind it while my uncles scavenged for fallen trees in the woods to bring back. Four truck fulls later we had an impressive pile of wood needing split and stacked. And so Labor Day work weekend commenced in full. I did a little chopping that first day and held a very cute baby cousin and then returned to stacking. I don’t actually know if there’s physical evidence of my splitting attempts this year, but they went slightly better than they did four years ago. My husband even gave it a try and did pretty well, considering he’d never wielded a maul before.

Sunday we went on an adventure to find a church. My husband had found a PCA church near-by enough to visit, we just had to get there. Lucky for us, the GPS gets a signal almost everywhere so we could put in the address. Unfortunately, we forgot to save the camp’s location before we left. So we went to church, enjoyed a very nice sermon and worship and got into the car to realize we didn’t exactly know how to get back. After struggling with the GPS to try and get a vague location and a call to my mom and dad to see if they could give us any useful information my dad finally just gave me directions and that got us back. Lucky for us it was a pretty straight shot down one and one turn to get us back to familiar territory.

After another lovely breakfast, which might be the best part of camping, I took up the maul once more to try and get some splitting practice in. Chopping wood is one of those things that I really want to be good at, probably because most of my dad’s family is really good at it, and partially because it just looks so cool. I’ve learned, however, that I need to build up a lot of arm strength if I want to be able to do it gracefully. Mauls are heavy, man. By the time I was done splitting my hands were sore, my arms were sore and I had bruises on my palms. I thought I had a blister, but I think it may have just been a pre-blister, and not an actual, real-life blister.

The weekend, for us, ended with soup. Which I feel a little bad about. We meant to leave so much earlier and then stayed for soup which put our leaving time at a little past 7. Next year we’ll know better. It was good soup, but I don’t know if it was worth getting home at 11. We also had a small car adventure right after leaving. It may just have been a rock got caught in somewhere and fell out again but we had this scraping/rattling sound coming from the passenger-side front wheel. We pulled into some parking type place to check it out, couldn’t find anything but a loose plastic cover looking thing under the hood and nothing around the wheel. Once we got in and started going again it made the sound once more and then was silent. We didn’t have any more trouble after that.

So that was my weekend camping with the Farki. All things considered, it was a pretty good time. My body still kind of hates me for it, but we had fun with my extended family and enjoyed being away from it all for a few days. I’m looking forward to our next camping trip, though, when we’ll have time to sit back and relax all weekend. I hope your Labor Day weekend was just as cool as mine.

‹ The Farki are Going Camping Confessions of a Picky Eater ›