The Influence of Anne 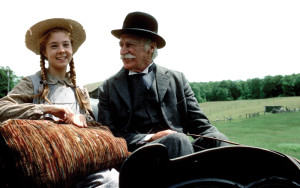 Once again I come to you in a rather half asleep state. My husband has dragged me from our bed so that I can blog like a good grown-up, but you can’t really drag the sleepies from a person. I am sleepy and my throat kind of hurts and I’m praying it’s not the beginning of a cold… though it probably is. Luckily I’m going to my in-laws today where tea is bountiful and there will be much watching of Anne of Green Gables, because it is a long movie and there is much to watch.

I often say I grew up watching Anne of Green Gables. The truth is, she was probably pretty minimal in my childhood as they only show’d the movie while the pledge drive was going on PBS and I always missed giant chunks of it because it’s a long movie and we never knew it was on until Anne had already reached Green Gables. But, I loved her nonetheless as I grew up watching her beat the boys at the three-legged race and walk the ridge pole and make friends with as many people as possible. When the movie happened to be on my senior year of high school while I sat sorting old pictures for my grad party, I felt this sense of perfect nostalgia. How could anything be more perfect?

My parents had started watching Anne when they got married and my father at some point, I’m assuming, ordered the book set from the pledge drive. I had this book set for several years, stolen from the family library, and thought always, “I should read all the books.” I started Anne of Green Gables several times, but I never got more than half way until, oddly enough, my senior year of college. By this time I was engaged to my husband who’s family, specifically his youngest sister, was very into the books. I brought the box set with me when I moved into the school apartment and read all three books that year, Anne of Green Gables, Anne of Avonlea, and Anne of the Island.

I’m stuck on Windy Poplars. I’m so close to the end of the book and I know it the next the thing I’ve been waiting for the entire series finally happens, but I am bombarded with other things to read and the book has been put aside again and again. Which is sad, because I would like to get to the end of Anne’s adventures someday, but then again, perhaps I don’t. I have issues with finishing things. I hate to see my favorite characters go. I know I can always go back and read the books again, but it’s different if I know the ending. Once you know how it ends, if it’s not the ending you want you’re stuck with it anyway. You can’t change it, or imagine a better one, you know that’s how it goes. This is the reason I haven’t read the seventh book of Harry Potter. I know everyone dies and I don’t want to read it and make it permanent. I want them to be okay in my head where they all live happily ever after.

I realize that Anne probably doesn’t have some horrible tragic end coming to her, and maybe I will get to the end at some point, but for now I’ll let her rest where she is, I think, and enjoy her adventures as a little girl in movie form. The movie is actually really well adapted, at least for the first one. The following movies, I’m told, go on their own ways and have very little to do with the rest of the books. This is a shame as they are all very good books and I really like the stories they hold. I haven’t seen the other two movies in a long time, and only in pieces if I ever saw them at all, but I’m hesitant to do so having read the books. I’m very attached to the book plots and I don’t know if I could handle what they throw at Anne in the movies.

This is one of the many things I want my children to read and watch as they grow up. I finally gave in and bought the DVD copy of the first movie just so I could have it to watch whenever I want. I’ve seen the movie so many times, I know the story by heart, and yet I cry at the end every time. My Twirly was impressed with how fast the tears appeared. One moment I was fine and then the line was said and they were there, like magic, flowing down my cheeks. But that’s one of the things I love about the story, there are so many emotions flowing all over the place and they are all so intense you can’t help but feel them, even the third or fifth or 20th time you watch it. They are eternal and Anne’s spirit is unbreakable and if I have any daughters, I want them to learn from Anne.

One thought on “The Influence of Anne”