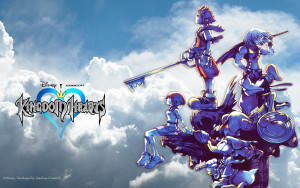 I was recently mentioned in a blog post by my Twirls on her love affair with Kingdom Hearts, which I am responsible for. In her post she states “I don’t remember how it started, but we ended up having regular Kingdom Hearts dates; she’d play while I watched.” As I read this I thought, “I know how it started. My fiance got me a PS2 for Christmas.” But that’s not going back quite far enough, is it? Sure, he got me the console which allowed me to play Kingdom Hearts for Twirly and thus get her addicted to the series, but he didn’t get me Kingdom Hearts. It’s not his fault I have my own affair with video games. That blames goes back a ways.

I was born seventeen months after my brother. This may seem like it’s going back a little too far, but in reality, this is where it began. A year and a half is not very much time between children. Growing up I wanted to be just like him, because obviously my brother was the coolest. If he was into something I wanted to be into it too. We started out on the Nintendo and Sega my uncle passed down to us, playing Mario bros. and Sonic 2 together. We would sneak down late at night sometimes to play, because my brother has always been a night person.

When my brother turned eight he got a PlayStation and opened up a world of single player games that hadn’t been available to us before. Sure, we could play Crash Bandicoot together but he was moving on to Legend of Dragoons and all the Spyro games and to be like him, I needed to get into single players too. There was just one problem; I was really bad at video games. It was impossible for me, in a world without the internet to help me along, to find my way through the games on my own or to defeat the puzzles and bosses by myself. I needed my brother to tell me what to do or I was lost. My brother, as much as he will deny it, is actually very kind when he wants to be, and after completing Spyro 2 100% he unlocked the permanent fire power and put it on a new save so that I could play through the game on my own. Sure, it was technically cheating, but it was the first game I ever finished by myself.

The years to follow would bring many different games and game consoles through our house. And I would dabble in them here and there, but mostly I would watch my brother play and gather the stories from them that way. I didn’t really have any interest in playing the games myself, I just wanted to stories that went along with them. That is, until Kingdom Hearts became a thing in our house. Until then, watching had been enough. Sure I missed the bits that my brother played through when I wasn’t around, but I got a big chunk of it and that was sufficient for me. This, though, this I wanted to see for myself. I wanted to go on the adventure too, to see all the Disney worlds and beat up heartless. And so I did.

Kingdom Hearts and KH2 have long been two of my favorite games of all time. I have played through them more times than I can probably count. Funnily enough, however, I never got to the end until my senior year of college. I had watched my brother play through the last parts of both games and seen the end scenes so why did I need to finish them myself? Boss fights are scary, man. I did try to get through them, but every time I got near the end of KH1 I couldn’t wait to start KH2 and when I got near the end of KH2 I got scared of the boss and started level grinding and then got bored with level grinding and left the game where it was. Not a good system. And of course you can’t just go back and finish the game from where you stopped. You have to start over, cause if you’re going to play it you might as well play it through.

Then I got to college and got my best friend addicted to the story and she wouldn’t let me stop near the end. She had to know how it finished and I was responsible for showing it to her. Thus, after ten years or so of playing Kingdom Hearts over and over without completing the game, I finally beat them both. And there was much rejoicing, and some screaming.

Kingdom Hearts is a game played for the plot, which is funny, actually, since the plot is really convoluted and confusing. It’s spread out over way more games than those in the number sequence. There are layers and layers of characters and actions that all connect and if you haven’t played the handheld games you’re going to be a little confused. Lucky for me, I’m good at just accepting things without question. I would like to play the other games at some point, though, just for the plot elements. The game play for some I hear is pretty bad, but I do want to see for myself all the bits I heard about. Someday, perhaps

So that’s how it started. My brother got me into video games and I got Twirls into Kingdom Hearts. Such is the circle of games.