The Story of the Purple Hat 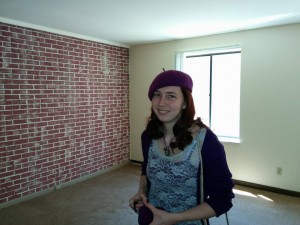 I’m a hat person. I have been told for years that I have a good shaped head for wearing hats. I’m not actually sure if that’s a complement or not, now that I think about it, but I always took it as one, so why stop now? I love hats, and I’ve come to have quite the collection of them over the years. But all collections have to start some where and mine started with the purple hat.

I have several purple hats. It’s not as many as people might thing, but I own at least three. However,  As opposed to my floppy ear hat, or my bow hat, I always refer to the first one as my purple hat. It is the definitive purple hat in my mind. Sure, it has faded to an almost raspberry color now, but if you look in side you will be assured by the color that it was indeed once true purple. This is my favorite hat, the hat I am known for wearing. It was an identifier along with my purple blanket that my husband would use to tell people who he was dating in college. “She wears the purple hat.” It all started with this purple hat. My purple beret.

Our story begins one fateful day during my senior year of high school. It was December and I had spent probably more of my break than necessary watching Mythbusters. I really, really like Mythbusters, like, more than is probably healthy. In high school I thought Jamie was just the coolest there was. I mean, he is, but I’m slightly less infatuated with him now that I can’t watch them on a regular basis. Anyway, Jamie Hyneman is known for his beret that he wears all the time. His reasoning is that he’s bald and he doesn’t like caps or whatever it is Adam wears, so he goes with the beret. I wanted one. I wanted to be just like Jamie. So when I saw this purple beret sitting all alone in Walmart on a random shopping trip I knew I had to have it. Sure, I would have preferred black, like Jamie’s, but it was in my color, in my signature shade at the time. I couldn’t pass it up.

So I wore the beret to school, even though we weren’t allowed to wear hats. I wore it like every day and was hardly told off at all. This was about the time I also got my floppy ear hat and sometimes they would trade off when it was particularly cold, but for the most part, it was always the beret. This carried over to college, even after I got Charlie, my Irish cap. He’s the only one with a name, and gender. He is a close second favorite, but he could never replace my purple hat.

There is a song, apparently, about a girl in a raspberry beret. My in-laws are very musically inclined and apparently couldn’t help but think of the song every time my husband told them about me. When I started working in the library at Geneva I apparently missed the part in the packet that told me I wasn’t supposed to wear a hat. I didn’t even think about it until my boss mentioned it towards the end of my first summer. Apparently she had been letting it slide since I looked so cute in it. That couldn’t last, of course, since it wasn’t fair when she had to tell boys not to wear caps while working to let me keep my beret, but it was rather flattering to think it was allowed for just over half a year.

Out of all my hats, my beret has gotten me the most complements. I think because it’s fairly unique. There aren’t a whole lot of people running around in berets where I’m from. I occasionally get someone who asks if I’m French because of it. For a long time I said no, I didn’t have any French in me at all. Apparently I was wrong. While doing some family history research I discovered that the German part of my dad’s family was actually mostly French. Generations back a German moved to France and married a French girl. They had a son who married a French girl who had a son who married a French girl and so on until they came to America. Don’t tell my dad I told you that.

To this day, I am still wearing the purple beret. It is my definitive hat. The one people picture me in when they think of me. I’m sure I will have to give it up someday. Walmart grade construction doesn’t tend to lend itself to lasting forever. However, it’s held up for five years now and despite being slightly discolored, it’s showing no signs of wear. I hope that I will have it for many many years to come. I would not mind being forever known as the girl in the purple hat.

‹ In Honor of the Studio Theater Daylight Savings Ramble ›